Each week we are following the lives of members of my Great Grandfather William's family as they appear in this 1890 family portrait. Last time we focused on Mary Ann Fraser (front row second from left) and this week we focus on the most tragic member of the family, Isobella (front row seated between her older sister and the young boy, my grandfather, to the right).


Isobella was born in Inverness Scotland in 1869, married Joseph Carroll after the family immigrated to Canada and together they had 3 children. Her son, Francis Patrick Carroll, became the Bishop of Calgary. She also had a daughter Teresa Ralston and another son William, one of Canada's first seismologists, who is buried with his aunt Mary Ann. 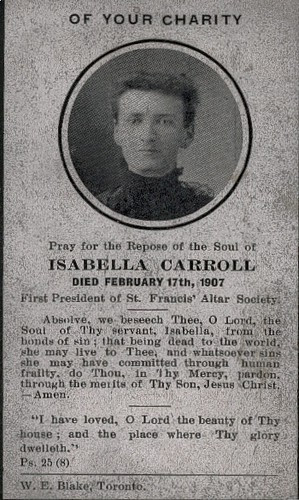 Isobella Fraser Carroll, originally uploaded by Anexplorer.
Returning from a journey to Winnipeg, early in the last century, the stove heating their railway carriage went out and couldn't be restarted. Isobella and her husband Joseph were forced to huddle under blankets for several days in the freezing cold as the train made its way across the harsh Prairies and the desolate landscape of Northern Ontario. Joseph caught pneumonia and died shortly after their arrival in Toronto. He was 30 years old. Isobella passed away 14 years later at 37 years of age. 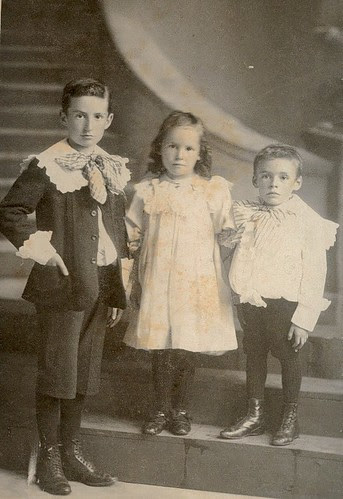 Their three children were raised by her parents and her sister Mary Ann. In fact, Mary Ann continued to live with William Carroll until her death and is buried with him. William Carroll was one of Canada's first seismologists, although crippled and suffering from a humped back. When Toronto was shaken by an unusual 5.3 earth quake, William was featured on the front page of the Toronto Telegram explaining how earth quakes occurred.