What Would You Ask A Space Scientist? 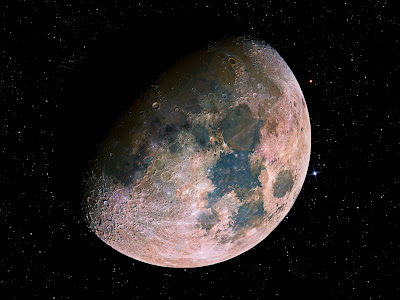 Sorry, no more Lindsay pictures. Today I can only bring you the moon!

Linda invited me to her school yesterday to meet a scientist from the Canadian Space Agency, the husband of one of the teachers, who had agreed to come in and talk with the grade six classes.

The children all sat on the floor of the school library while the astronomer sat beside a flip chart, which he used to diagram some of his responses. What he basically did was answer questions from 60 or so hyper-excited students, and one hyper-excited teacher's husband.

Can you grow plants on the moon? No its alternately too hot and too cold and the moon has no atmosphere and no soil, only rocks.

Can you land on Jupiter? No, Jupiter is a gas giant and, if you had some way to withstand its terrible gravitational forces, and you tried to land there you would just sail right on through and out the other side.

The questions were coming faster and faster. Nearly the entire 60 hands were raised.

Are there other Universes? That's a question for physicists or philosophers. Astronomers can only deal with the one Universe we see before us. Unlocking the secrets of one Universe is a big enough job.

The kids were literally bouncing with excitement and desperate to get their questions answered. The hour passed quickly with many questions left unanswered, including my own. (What did he think of Wallace Thornhill theory of electricity playing a greater role in the Universe than gravity? And, if I got two questions, what would he think was the most likely cause for the monolith on Phobos?)

If you were talking with a space scientist, what question would you ask?