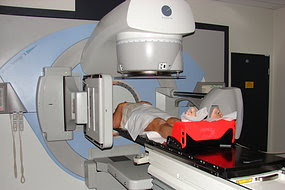 Picture a gigantic human hand formed into a claw, the fingers pointing toward you. Now picture a table inserted into the claw with you recumbent upon it, your head toward the palm. The fingers surround you and rotate around you, a different machine at each finger tip. Around and around they go like the barrel of a Gatling gun, only quietly with a Strauss Waltz playing in the background.

It is the middle of my second week of radiation therapy and the radiation therapists have noticed something. The normal procedure has come to an unexpected halt. They've called in their medical consultant who is reviewing the scan they've just taken before continuing with the procedure

"We're just reviewing your scan with the doctor, Barry" a quiet electronic voice tells me. "We will be starting again in a couple of minutes."

So I wait, my arms held behind my head pointing back toward the palm of the machine and my left arm just beginning to ache.

But pain is nothing new these days. I've been through many painful tests and my digestive tract is ever alive with pain. For over a week now we have struggled to get me to keep food and fluids down. Linda has researched and consulted and strategized, but my gag reflex seems to be on a hair trigger, one moment able to tolerate anything, the next sending me running to the washroom to regurgitate over and over and over again. The doctors have given me new anti nausea medication but it seems minimally effective.

It is discouraging. And more than a little frightening.

I have lost over 35 pounds since this all began last March. I'm now down to the weight I was at age 20. And I still have the hard fifth week of treatment to come.

The machine begins to hum and the fingers rotate gracefully. Green laser lights run across the ceiling. One of the fingers stops overhead. The machine engages and begins radiating my chest.

Beyond the hum of the machine I can hear the faint but distinct sounds of a rising murmur. It pervades the room. It pervades my head and my soul. It is the murmur of human voices from virtually around the world. Praying. For me. A total stranger. Sending thoughts and energy to me. A total stranger, his chest marked up like a pirate's treasure map, lying in this cool and empty room, listening to Strauss.

If there is a miracle in my life this is it. That bloggers the world over would take the time and energy to keep me in their thoughts and prayers, defies belief.

I picture God in His heaven puzzling at the sound. "Gabriel," He calls. "Who is this Barry all these people are petitioning me about?"

"Never heard of him," says Gabriel. "I'll have to get his file out of the cabinet. And, by the way, we should get these files digitalized some time. Its a miracle we can find anything around here."

Above me the radiation machine hums and the next finger glides into place.

There is no sensation to being radiated. It doesn't hurt in anyway. At least not yet. But it needs to be precise and my chest is marked with tattoos and magic markers including a large "X".

Due to the earlier delay, by now my arms have been above my head for so long that my left arm is dancing with pain. I fight to keep it still. They don't want any movement to distract their aim. And neither do I.

Beyond their prayers and good wishes, Bloggers have sent me books to read. Books that entertained or enlightened them. Or inspired them. Linda and I were even sent hand crafted matching key chains so that even if we are apart, we are still connected. And bloggers have taken the time to leave comments and helpful suggestions. Linda and I read them all with an insatiable hunger looking for new ideas we could try to get me eating and drinking reliably again.

The fingers of the machine glide past me again and in the distance I hear a door open and a radiation therapist appears before me.

"Alright, we're finished. You can let your arms down now," she says. "We noticed a change in your tumor last time that we had to have our medical consultant look at. That was the reason for the delay. He wants us to redo the scan tomorrow with a dying agent to provide more relief and he will forward his findings to your radiation oncologist in time for your meeting on Friday."

"I don't think its anything to be too concerned about," she says.

And I gather my hospital gown around my skinny frame and head back to the changing rooms, back out of the hospital and out into the world. In search of a meal and a drink I can swallow.