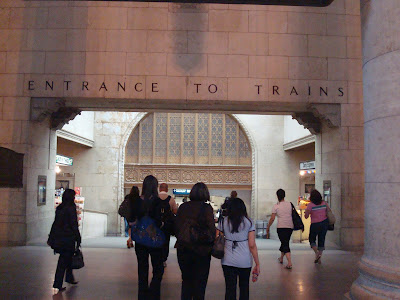 "No, it's 5 FU," the pretty Indian nurse explained, "Short for Five Fluorouracil your second cancer drug You'll be taking it 22 hours a day everyday this week and I'll be sending it home with you along with this pump."

I looked at the pump and the large bag of clear fluid on the table beside my bed in the Chemotherapy Day Care Centre.

"Did you bring a fanny pack?" the nurse asked.

The nurse shook her head sadly, "They prescribe 5FU and always forget to tell the patients to buy a fanny pack. You'll need one because you're going to be wearing this for the next 22 hours."

She turned to my brother-in-law who had come with me today. "Maybe you could run down and buy one. They sell them at the hospital tuck shop, or if they don't have them there, Staples is just down the block and they sell them as well."

"Sure, no problem," said Steve, getting up from the chair beside the bed.

"It needs to be about this size," the nurse said gesturing with her hands.

Steve nodded and started off on his quest for an FU bag holder.

The Chemo Day Dare Center is a long narrow room on the 2nd floor of Princess Margaret Hospital with beds along each long wall, separated by a hospital curtain for privacy. But from my bed I could see across the room into the bed of everyone across the next wall, where they all sat looking back at me.

I waved. But no one responded. No one was looking like they were having a good time.

My nurse laid out the various bags in her container on the top of my table.

"These are the medications you'll be getting today." she said. They all looked like bags of water in various sizes. "First a saline solution. Then an anti-nausea drug. Then Cisplatin your main cancer drug and finally another saline solution."

Having already implanted a splint in my vein, she hooked me up to the saline solution. "This will take about 40 minutes," she told me.

I settled back in the bed. I had brought "Fugitive Pieces" by Anne Michaels with me to read. It had been given to me by Ruth at the Synch-ro-niz-ing blog and was a very lushly worded tale of Jacob Beer, a wild young survivor of the Nazi Holocaust who struggles to find meaning in the abyss his life had become. I was about 3/4 of the way through and Ruth thought I'd like the book, but instead I loved it.

Forty minutes flew by and the pump beside my bed started ringing. The nurse hurried over to check the bag. Saw there was a little of the fluid left and reprogrammed it for another minute or so. Across the room other pumps were starting to ring and nurses were whirling around resetting the pumps or exchanging bags.

When my pump rang again she replaced the bag with the anti-nausea medication and then Steve was back with the fanny pack, his face wet with sweat.

"The tuck shop was out of them," he explained. So he had gone Staples but they were sold out. They sent him to Roots. Roots sent him to Mike's Work Wearhouse who sent him to the Mountain Canyon Coop. But by now he was half way down to the lake. However they had a variety of fannypacks in all different sizes, but when he went to check out they wouldn't sell one to him.

"You had to be a member," he told me. So he had brought a membership. A long exhausting trip but at least he had found a fannypack.

"Too small" said the nurse as she passed. "It's got to hold the 5FU medication and the pump." She showed him.

Steve wiped his forehead, turned tiredly and trudged back out into the heat of the day mumbling something which sounded somewhat like a shortened version of 5FU.

"Now we come to your cancer drug," the nurse said, changing my bag. "This will take about an hour."

I took out my ipod and opened itunes to Diane Arkenstone and lush music filled my head. I relaxed into it and returned to Jacob Beer. Time passed quickly and Steven eventually staggered back with a larger fannypack. I was switched to a final saline solution.

Then the nurse returned to hooked me up to my 5FU pump which she loaded along with the 5FU bag into the fannypack. She showed me what to do if it ever sprang a leak and when to run to emergency if it ever pulled out of my arm. Then she turned it on.

"No it doesn't," said the nurse. "That's just a mechanical noise made by the cmpressor.

And my first chemotherapy treatment was done.

Instead of feeling nauseated or fatigued, I left feeling strangely exhilarated. In fact I found I had more energy than I had in days.

Perhaps it was all the water they pumped into me? Or maybe it was the morning of enforced relaxation? As the day wore on I found I had more energy than I had had in days.

Or maybe it was just the funny name of the drug that lifted my spirits?