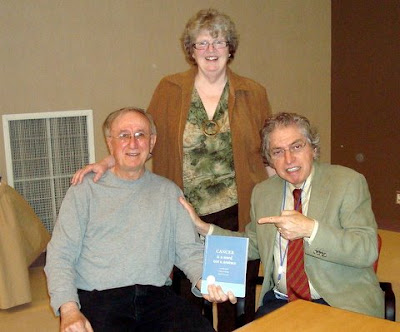 The phone hasn't rung, but it will ring today.

It has been a week since I underwent a bone marrow aspiration that will determine, finally, if I now also have cancer in my right hip, a discovery that could change the course of my treatment. That could move my diagnosis from "curable" to "treatable". Not a journey I want to take.

It has been a week without feedback. Or there has been feedback but we were out of the house focused on Linda's mother's emergency hospitalization for severe kidney failure and no message was left on our voice mail. Amazingly, Linda's mother is now back in her own room at her nursing home and showing clear signs of improvement. Both our daughters and their families were there for a visit yesterday which cheered her greatly. Especially holding the new baby.

After the visit we took the family out to dinner where I made a discouraging discovery; but not one that surprised me. My throat has closed up again and I am no longer able to reliably tolerate solid foods. It could be the stress of the past five days which has been considerable. I've lost 30 lbs. since my diagnosis and don't need to loose more. I've known all along that the throat dilatation was temporary but had hoped it would last until I was well into chemo, which would shrink my tumor and allow me to continue to eat semi normally.

But I've faced a month of delays as test after test showed signs of anomalous results and now I've just run out of time.

I need the phone call today with word that a firm decision has been made on treatment. I will call them this morning at 9 o'clock and continue to call them until I hear.

What ever the decision, I will let you know.

The photo above shows Linda and I at a recent workshop with Dr. Robert Buckman, oncologist from Princess Margaret Hospital with his book "Cancer Is A Word Not A Sentence."

I don't want a sentence, just a word about treatment would do fine.

With my oncologist away until June 2nd I managed to finally reach the Nurse who is heading up my research study. She was onto the lab to find out what was keeping my results and they have promised to have them ready by this afternoon (cultures taking their own sweet time to grow).

Once she has received the results she will email them to the oncologist who will review them and get back to her. The nurse is keeping my chemo treatment date open tomorrow excepting a negative (negative is good) result from the lab. But in either case she will let me know as soon as she has heard back from the doctor.

In the meantime I just have to continue being a patient patient.

As Linda says, now its just time for me to breathe.

Having not heard back, I phoned the hospital again.

The final results are not in yet from the Pathologist and won't be, not until at least tomorrow. So Chemo will have to be delayed, once again, because the pathologist suspects, based on his preliminary results, that I have the very beginnings of lymphoma. That they have uncovered the very birth of a lymphoma, if you like, hence the very strangeness of the various test results. And Lymphoma would mean that I have two primary cancers, not the metastasizing of my esophageal cancer to another part of my body.

So if there is good news in this, it is that. If the esophageal cancer had spread it would no longer be curable. They could treat it and prolong my life for a while, but they would be unlikely to defeat it.

Lymphoma, on the other hand, is curable, especially the extremely low grade lymphoma I might have.

So I may have two curable primary cancers. However, having lymphoma will likely mean changing the kind of chemo I will be receiving, or its duration. That is a decision the oncologist will have to make after the final pathologist report arrives tomorrow.

So no chemotherapy tomorrow, but once they've decided on a course of treatment, they will do their best to get it started later this week.

Enough time has been spent in diagnosis already. Of course, assuming they've discovered a second primary cancer, my having gone through all these additional tests will have proven worthwhile. I won't have gone through esophageal cancer treatment, only to find out in a year that I have a lymphoma to deal with.

Both can now be cured together.

Makes me wonder what I've done or where I've been in my life to have developed two primary cancers simultaneously? Now that's something to ponder.