Lindsay and the Miracle Cure 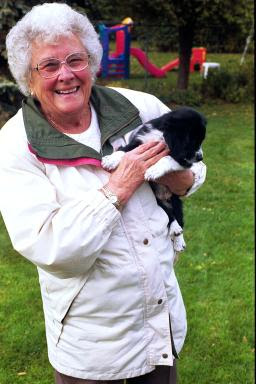 Alright, I confess, I slept in and this is a repeat of one of my earliest Lindsay posts. I promise next week I will post the verdict on Lindsay and the great Earth Box Caper. But for today, here is one of the earliest introductions to my strangely quirky dog that you may have missed.

The day is warm and Lindsay is especially frisky. Her black coat gleams and she darts about with her tail wagging delightedly, her nose scraping the surface of the snow like a vacuum cleaner sucking up scent.

Suddenly she pauses and stands alert, eyes scanning the pathway ahead of us. Then as I approach, she gives herself a shake and prances off along the path until she vanishes into the distance. Seconds later she comes racing back, dancing excitedly around my feet. Come on slowpoke she's saying, lets get going.

It is hard to believe Lindsay is crippled with arthritis and wracked with severe pain.

Yet that was the diagnosis from our vet. Until a year ago Lindsay would limp painfully around the house and could often be found huddled in a back room whimpering in agony. For three years I could only take her for short walks around the block, Lindsay limping and whining all the way. It was painful to watch.

She was on a daily dose of aspirin to ease her suffering; but this barely seemed to take the edge off.

And then her arthritis went away. Vanished completely. In a single day.

Within a week of my arthritic mother moving into a retirement home.

Since my father's death, my mother (that's her in the photo above on the day Linda and I brought Lindsay home for the first time) had lived in a granny flat attached to our house. She cared for Lindsay through the day while we were at work. A very independent woman, she cared for the garden, cooked her own meals, had the dog for companion, and limped painfully about her apartment. Her arthritis is so bad she had a knee replaced two years ago and may need surgery on the other. But now at 89 there are other health issues that make that operation unlikely. So she winces painfully and uses a walker to get from place to place.

Had Lindsay been miraculously cured of her arthritis? Or had she been mimicking my mother's behaviour?

The March issue of National Geographic has an article on animal intelligence. The cover star is a boarder collie with a vocabulary of 300 words. Lindsay is an English Springer Spaniel and I have no idea how many words she understands. She's certainly the smartest dog we've ever owned. Knows all the family members by name. Never needs to be talked to in short commands, she's very comfortable with sentences. Although sometimes the simple word "NO" seems a challenge for her.

That our pets have minds and thoughts comes as no surprise to many of us who have spent most of our lives in the company of animals. What is surprising is that it has taken so long for this to gain scientific acceptance. Are we that insecure about our place in the universe that we can’t acknowledge what is right in front of us?

Lindsay plunges back along the trail toward me, her eyes sparkle and there's a smile on her face. I don't think she's a miracle dog. I think she's just trying to be part of the family. Just trying to fit in. As the National Geographic article says, "A dog in a human pack needs to learn to adapt."