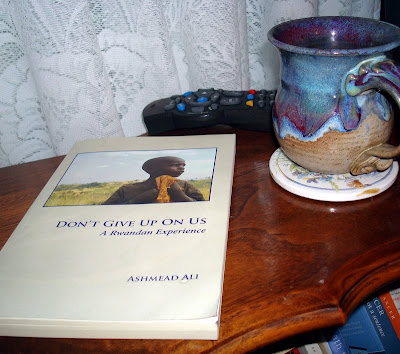 It is now July 2009 and Linda and I are attending the Alive With Culture festival at the Guild. There are dancers on the stage at the Greek Theatre, arts and crafts tents line the grounds, bands stroll, couples browse, the sun shines, organic vegetables beckon. Linda has paused in discussion with a potter who is answering questions about her glaze and I am left to roam aimlessly amid the delights that surround me.

Off to one side is a small table, its surface covered with books. Well, three books actually, but lots of copies. A man sits behind the table watching as families stream past him without a glance, their vision entranced by nearby booths filled with colourful paintings, sparkling jewelry or glistening pottery.

But books intrigue me. So I wander over.

The man seated behind the booth is Ashmead Ali and he is representing the Scarborough Writers Association. I hadn't known there was such a thing, but apparently aspiring writers in the Scarborough area of Toronto gather together for monthly meetings to discuss their work and support each other.

And Ashmead has published a book: "Don't Give Up On Us, A Rwandan Experience." The book is for sale for $16, but for $20 I can buy all three books and support the Writer's Association. So I do. I look his book over briefly, noticing sadly that it is self-published. And put all three books away in my bag and forget about them.

A month later, Linda and I are heading off for a weekend away in Peterborough and I am looking for something to take with me to read. I rediscover Ashmead's book and throw it in my travel bag. If I don't enjoy it, I can always find something in Peterborough to read instead.

That evening, Linda is deeply engrossed in Kathryn Magendie's novel,Tender Graces, emerging only now and then to mutter things like, "This is good. This is really good!"

Within a few pages I discover a couple of things. Although this is a book in need of a good editing, I'm really enjoying the read. It is well written but with occasional annoyances that draw me out of the narrative and make my fingers itch for a pen so I can go back and revise a few paragraphs and excise words that appear with annoying regularity. The phrase "sub-Saharan Africa" appears way too frequently and is by far the worst offender. A good polishing from a professional publishing house and Ali's work could have been a best seller.

As it stands, I discover a book that is passionately written, intelligently written and has a drive and force that propels me on. And soon I find myself muttering to Linda, "This is good. This is really good!"

But more than that, I was beginning to sense that this is a book that is important.

Don't Give Up On Us tells the story of Ali's trip to Rwanda to market his company's plan to introduce a new sanitation system to the city of Kigali and Kigali Airport. He finds himself staying at the hotel Milles Collines made famous by the Hollywood movie, Hotel Rwanda, that retells the story of the hotel manager's efforts to save 1000 people during the 100 days of savage genocidal attacks that swept the country.

During his stay in Rwanda, Ali finds himself drawn into the country's current plight, its geographic problems, its political difficulties, its frightening treatment of women, its nightmare battle with HIV/AIDS and other diseases, its grinding poverty, its potential for violence (he has an armed guard from the army assigned to protect him during his stay), its political corruption, its dependence on relief organizations and, yes, its wretched and disease producing cesspit of a sanitation system that he hopes to modernize.

In many ways his book is a corollary to Romeo Dallaire's "Shake Hands With The Devil" that updates the story to the present time.

I may not have been able to shake hands with Dallaire, but I had with Ali. And he had autographed my copy of his book.

The world could do worse than to listen to him. Instead of streaming past his little book stand at the Guild's Art festival.

I'm left saddened that such an important book is getting so little attention and was unable to find a publisher, or the readership it deserves.

We need to do better than this.

Several people have asked where copies of this book may be found. Mr. Ali has kindly permitted me to pass along his e-mail address: ashmeadaali@yahoo.ca where he would be more than happy to sell you a copy.