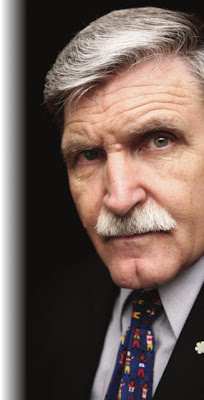 Almost exactly a year ago BC (before cancer), I arrived home from a visit to my daughter in Whitby to find a phone message from work. Usually that is not good news. Usually that means a major problem of some kind.

This time it was a problem of a different sort.

My company had brought a table at the National Quality Institute's Gala and we were hosting the Executives of several of our major corporate clients. At the last minute the Vice President of one of the organizations had backed out and we were one person short at our table (each table seats 10 people).

Could I fill in?

Sir Richard Branson, President of Virgin (everything) would be there and General Romeo Dallaire would be receiving an award. It was not a black tie event, but was definitely black suit.

What, I thought, drag me away from a night of watching TV for this?

Well okay, if you insist.

The National Quality Institute (NQI) an independent, not-for-profit organization is the leading authority in Canada on workplace excellence based on quality systems and healthy workplace criteria. A Board of Governors comprised of leaders from the private sector, public sector, health care and not-for profit sector governs NQI. NQI acts as a national partner with many organizations to advance the Excellence movement in Canada. The Governor-General of Canada is its honorary chair.

Lieutenant-General Roméo Alain Dallaire is a Canadian senator, humanitarian, author and retired general. Dallaire is widely known for having served as Force Commander of UNAMIR, the ill-fated United Nations peacekeeping force for Rwanda between 1993 and 1994, and for trying to stop a war of genocide that was being waged by Hutu extremists against Tutsis and Hutu moderates.

The following is one of my favourite quotes from his 2003 book, Shake Hands with the Devil--

The genocide in Rwanda was brutally efficient, lasting for a total of 100 days and leading to the murder of between 800,000 and 1,171,000 Tutsi and Hutu moderates. Over two million people were displaced internally or in neighbouring countries. The Genocide ended when the Rwandan Patriotic Front gained control of Rwanda on July 18, 1994, though recrimination, retribution, and criminal prosecutions continue to the present day.

Dollaire and his small and ill equipped 5000 man force is credited with directly saving the lives of 20,000 Tutsis and Hutus.

I thought it would prove an interesting evening.

In part two, I will tell you what brought this particular evening to mind.