After the funeral of Linda's mother on Saturday we met our daughters and their families at Rosetta McLean park. Heather had returned my car with its new engine, so Linda and I drove to the park in separate vehicles and I was the last to arrive.

The funeral had left me in a philosophical mood and as I drove I could feel a shifting beginning to take place within me. I was starting to let old feelings go, reservations fall away, dreams topple, new hopes beginning to take root.

And as I drove, the gray clouds of the morning thinned and the sun began to peek through. The colours of the world, the colours of life, blossomed. As I drove, I smiled.

Rosetta McLean Park is a beautiful if somewhat formal park in Southern Scarborough. It is a park of groomed pathways, dramatic fountains, mature trees, colourful flower beds, water features and my family waiting for me.

It radiates life. Linda, Heather and Kathy sat on Park benches deep into humorous conversation, their laughter bubbling up like the water in the Park's central fountain that flowed from a giant granite boulder over ten feet in height. After being so quiet and respectful during the funeral service, my grandchildren had a lot of tension to burn off and ran and played and laughed around the fountain under the watchful gaze of their fathers.

A small red squirrel ducked under one of the benches in search of food. I was amazed. I had never seen a red squirrel before. It was a new life, unknown to me and I was fascinated. 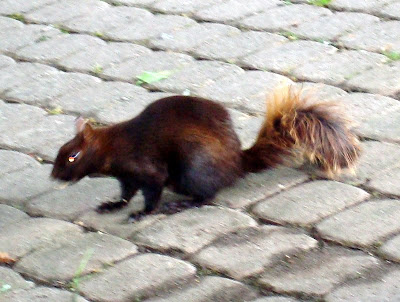 The squirrel reminded me of the day we first brought Lindsay home as a young puppy. That was a time of loss for us as well. My daughter Kathy had recently married, my other daughter Heather was living in Guelph and my step father Al had just passed away.

And into our uncomfortably quiet life came this tiny black dog no larger than that red squirrel, a small black puppy who throbbed with new life and joy and excitement. Everything intrigued her, interested her, puzzled her, and the world as we came to see it through her eyes was a new a wondrous place. 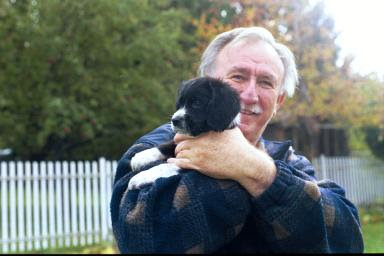 I remember opening to that energy, to that new life with a feeling of joy. It was the kind of energy I had begun to sense earlier at the funeral without quite recognizing the feeling. But now I was coming to recall it, to know it for what it was.

The recognition of a future opening before me.

A huge future yawning before me, discovered first in that park full of beautiful flowers, bushes, trees, lawns of green grass, the first blue skies we had seen in days and fountains of pure water, and my family. And one small red squirrel.

Then, yesterday, Linda and I traveled once more to Princess Margaret Hospital for still another meeting with the medical Oncologist. When we got there the Staff oncologist was working alone, her residents and fellows all away and 25 patients for her to see. We were kept waiting for nearly three hours.

But the news was worth the wait. She had the results of my recent MRI. As she explained it to us, the specialist's report on an earlier CT scan, the one that had discovered a couple of new hot spots on my spine, had strongly suggested in his findings that it demonstrated a metastasizing of my esophageal cancer to my spine. The specialist was certain of his results. A horrible and deadly finding.

However, the Medical Oncologist had been unconvinced. She kept thinking about the anomalous readings they continued to get on my right hip. So she had requested the MRI as a kind of second opinion, and now she had the report in front of her. The specialist reviewing the MRI was equally convinced the hot spots in my spine were a diffusion of the problem in my hip to the bones of my spine. He was convinced the MRI showed, at worst, a low grade lymphoma or another relatively mild illness of the bone marrow.

Non fatal, in either case. Something to keep an eye on, certainly, but nothing to loose sleep over.

A problem to live with.

So two tests each reaching different conclusions. Each canceling out the other.

Tomorrow, Wednesday, at 10:00 AM I go for a CT guided biopsy, the actual extraction of a section of bone and marrow that can be directly analyzed and that will answer the question for good. Life, death or Mu. My future.

After the meeting with the Oncologist, Linda and I returned home and Lindsay greeted us at the door, alive with the same life and vitality she has always radiated.

And I realize, even without the test, what tomorrow's result will show.

Life has me in its grasp and it has no intention of letting go.

For those Canadian readers of this blog who have access to the Canadian edition of Reader's Digest, I have a brief letter to the editor published in the September edition. It is a response to an earlier article about esophageal cancer that appeared in June of this year. 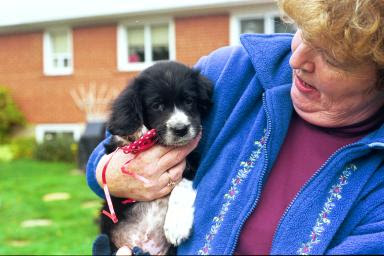