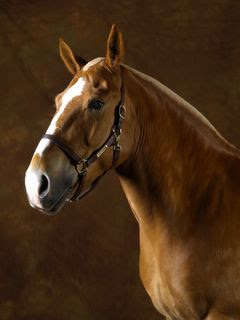 Brigadier was an 8-year-old prize-winning Belgian cross, who worked in the Mounted Unit of Toronto Police until he was killed by an erratic driver at Lawrence and Kingston Road, about a kilometer from my home. Being 16 hands high, "Brig", the "Gentle Giant", weighed 1500 lbs but was no match for a speeding van.

According to police, Brigadier and his rider, PC Kevin Bradfield, were on Community Patrol in the West Hill area, when their attention was drawn to a driver of a van stopped at the former drive-through ATM machine at TD Canada Trust.

The driver was reportedly yelling and screaming at the driver in front of him. The enraged driver sped away when approached by the mounted unit, but then made a screeching u-turn and came roaring back down Lawrence, ramming full force into Brigadier. Leaving the horse and his rider crumpled in the roadway. Brigadier had been struck so hard, the full imprint of his head was in the roof of the van

The officer's neck, back and rib were damaged, and he was rushed to hospital with non-life-threatening injuries. But Brigadier had taken the full brunt of the collision and his massive injuries were untreatable.

He was put down where he lay on the street next to MacDonalds Restaurant, by officers from the Toronto Police Emergency Task Force.

Unlike many other countries and several US states, there are no additional charges available under the Criminal Code of Canada for deliberately killing a law enforcement animal. This is despite the critical roll Police Service Animals perform in a whole range of duties such as Search and Rescue, Community Oriented Policing, Public Safety and building a bridge between the community and the police.

Duties that often place their lives at special risk for the community good.

Now Dan Sandor has proposed creating an amendment to the Criminal Code of Canada to better protect Law Enforcement Animals.

Letters have been written to the Canadian Federal Government, including the Prime Ministers office, regarding this proposal giving Police Service Animals the much needed protection they require, under the law.

The proposed amendment was nicknamed "BRIGADIERS LAW". For a copy of the open letter to Stephen Harper, Prime Minister of Canada, written by Dan Sandor, visit Brigadier's Law or you can now join us in furthering this cause on Facebook at Brigadier's Law. For more on the Toronto Police Taskforce visit Storyward.