It's Taken A While To Get Here 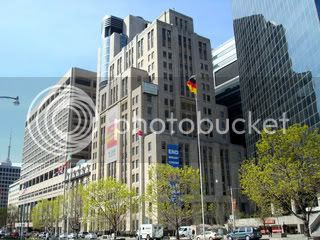 It's taken a while to get here.

I first noticed difficulty swallowing early this year, after getting a piece of chicken caught in my throat, but it was a condition that came and went. Once I was forced to accept it was a situation that was persistent, and serious, I contacted my family doctor in late February. I was sent for an immediate gastroscope and samples were taken for biopsy.

Two weeks later I was called in to receive the news that I had cancer. A rare and very aggressive form of cancer at that. Then I was referred to a thoracic surgeon and an Upper GI series and a CT scan were ordered. Another two weeks went by.

When the those tests were finally completed, I was referred to an Oncologist at Princess Margaret Hospital. The number of Oncologists rapidly grew to six, I received three more CT scans, a PET scan, another gastroscope, an ultrasound scope, gave enough blood to end Canada's national blood shortage, joined two research trials and consulted with a nutritionist. I learned to meditate. I received emergency dilatation to reopen my nearly closed esophagus. I had titanium markers pierced into my throat and got four tattoos inked onto my chest to help align the radiation treatment. I suggested biohazard symbol tattoos but ended up with unimaginative, and nearly microscopic, dots, not worth photographing for you to see (either the tattoos or my chest).

I read enough about esophageal cancer and its treatment, and alternate treatments, to confuse and terrify me.

Finally, tomorrow at 10:15 in the morning, I begin treatment, 5 hours of chemo delivered intravenously. That will lead off a full month of weekly chemotherapy injections followed by 5 weeks of daily radiation and then another set of chemo.

And then comes the surgery.

I've downloaded some guided meditation tapes from the University of Michigan's Cancer center and I've brought some good books to read, including one by Pemo Chodron.

For those interested in what chemotherapy is all about, here is a brief video of one of the two drugs I will be taking:

And here is the other--

Medical Oncologist, Dr. Horgan: "Did Dr. Darling review the results of the ultrasound scope with you?"

Barry: "No, I haven't seen her since the scope. I'm anxious to hear the results though?"

Dr. Horgan: "Well, I'm afraid she found an enlargement of one of the lymph nodes beside your esophagus."

Dr. Horgan: "We can't be certain the cancer has spread, but that could be one cause for the node to be enlarged."

Where's House when you need him?