Lindsay and the Very Bad Day 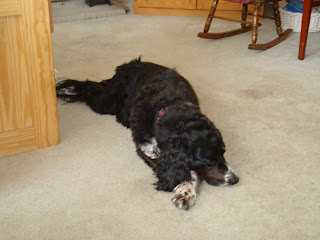 I didn't have a good day yesterday and neither did Lindsay

Lindsay began to suspect the day was not going to go well when she saw us rushing about getting dressed at an unusually early hour in the morning. Kettles were boiling, porridge was cooking, showers were running, teeth were getting cleaned, bags were getting packed.

And no one was paying attention to Lindsay. Not good signs.

The words "hospital" and "chemotherapy" were being used frequently, but they meant nothing to her. She went for her morning run in the backyard and when I called her in early she came with hopes it meant her longer run along the bluffs, but that was not to be.

No sooner was she in than we left. Lindsay watched through the front window as the car pulled down the driveway and started up the street out of sight. Lindsay scratched a nest for herself in the carpet and laid down with a sigh. This was not going to be a good day.

Nor were things going well for us either. Late in leaving, we hit all three of the traffic lights that separate us from the Guildwood GO station where we were to catch the train to downtown Toronto and Princess Margaret Hospital where I was beginning a cycle of chemotherapy. Because we hit all the lights, we arrived at the station just in time to see the train pulling out without us.

I looked on the missed train as bad luck. I should have realized it was a sign. This was not going to be a good day.

The second train got us to Toronto's Union Station just in time to keep our 8:30 appointment with the Medical Oncologist prior to starting chemo. But it seemed she wasn't having a good day either.

"You are a dilemma for us Barry," she told me. "We really haven't seen anything quite like you. You're quite unique."

"Tell me about it," said Linda with a sigh.

The doctor smiled. But sadly. "Your MRI showed a hot spot of cellular activity on the back of your right hip that puzzled us. The PET scan failed to find that hot spot but did show unusual activity in your bone marrow. That also concerned us and puzzled us. So we ordered that complete body X-ray and that additional blood work last week and the x-ray showed nothing nor did most of the blood tests. However, there was that one additional blood test we did that should have showed nothing (when all the other tests were negative) but it did test positive for the kind of protein that suggests a problem with your bone marrow.

"So we keep finding suggestions of further problems, then running tests that rule them, out only to find further suggestions of a problem, of some kind, somewhere in your right hip."

"Are you thinking some kind of lymphoma?" I asked. "With that one swollen lymph gland and concerns about bone marrow, that's something I wondered about."

The doctor conceded lymphoma was one possibility. I could have two primary cancers. It would be unusual, but certainly possible. If it was lymphoma, it was a very low grade and would be curable, but it would alter the protocol for my treatment. However there were other bone marrow disorders or it could be nothing. Just that my bone marrow was unusually active and nothing to worry about. But it could also be that the esophageal cancer had spread to my hip bone and that would be very bad news indeed.

My cancer would then still be treatable, but not curable. And that would also alter the treatment protocol. However, it would be extraordinary for the cancer in my esophagus to bypass my lungs, my liver and my kidney to travel all the way down to my hip. Almost unprecedented. But cancer is highly unpredictable, so it was theoretically possible.

So she was going to have to order still one more test to definitively determine what was going on with me. And that would mean canceling today's chemotherapy.

"I know how anxious you are to get started with treatment," the doctor said. "But we have to get the treatment right. We work as a multidisciplinary team, and we conferenced your case on Monday and it was the consensus of the team that the test result are likely nothing to be concerned about. But that we couldn't proceed on a hunch, especially with something like the involvement of the bone marrow which is an area of the body that chemo targets.

"So instead of chemo, I've arranged a bone marrow aspiration for you for ten o'clock this morning."

I said something unbecoming that indicated my degree of discomfort with the thought of needles being rammed through my bone and into my marrow. And the doctor did what she could to persuade me that the horror stories that were out there about the pain involved in the procedure were exaggerated.

Then with no chemo and an hour to kill, Linda and I did the only thing left open to us. We went to Tim's for a coffee.

At home Lindsay woke up from her doze with an uncomfortable feeling. She went to the front window and looked out at the street, alert for any problem. But ours is a quiet street and nothing was moving, not even a squirrel. Still she sat and looked. And waited. Concerned.

At the hospital the doctor assigned to do the biopsy on my bone marrow was not having a good day either. She had given my hip a local anesthetic ("You will feel a sharp pain as I insert the needle," she told me, "But once I inject the anesthetic that will go away.") and then ratcheted a needle into the bone at the rear top of my hip. Exactly where the hot spot had shown up in the MRI scan. But my bones were thick and strong and the needle wouldn't reach through to the marrow.

"You've been a good boy and drunk all your milk," she told me. "You have very strong and thick bones."

To reach my marrow she would need to redo the procedure with a longer needle. But even the longer needle wouldn't reach. So she needed to target a slightly different location where the bone might be thinner and the needle could reach. I was laying on my side with my pants pulled down slightly below my hip, feeling the second needle being driven into my bone. Hoping this time she would strike oil. She was getting frustrated but keeping a distractingly happy conversation going with the nurse.

"Aha!" she said. "Third time lucky. I think we're there. Yes we are. Now I just have to use a slightly larger needle to take a small plug of your bone and we're done."

Back at home Lindsay gave up on the street outside and ran to the french doors at the back to look out at the yard. The temperature had dropped dramatically and a wind was kicking up. The trees were bending and the swing in the yard was rocking threateningly. But no creature stirred although Lindsay kept up a vigilant watch.

"That took a long time," said Linda as I emerged from surgery an hour later. "I thought it was only supposed to take 20 minutes?"

So I explained the problem caused by a life time of drinking milk and the four new holes I now had in my backside.

Then having time on our hands, we decided to visit my step brother Norm who lives downtown. We called and arranged to meet for lunch. He had put on weight and looked tired but was interested in our experience on this not so very good day.

"You look tired?" Linda said to him.

His lip quivered, "I've been having some trouble myself," he confessed reluctantly. "It's my liver. The doctor thinks I may have something seriously wrong with my liver. I'm going for tests tomorrow. I'm really not in very good shape."

At home Lindsay finally slept. Sometimes there is just nothing more you can do.

And after a time, we returned from the hospital. And Lindsay danced around us, eyes agleam and tail wagging with joy.

Linda was tearing open the mail. There was a problem with Linda's 90 year old mother's account at Extendacare.

But we would have to sort that out tomorrow.

Today was just too bad a day.