Lindsay and the Thunderstorm 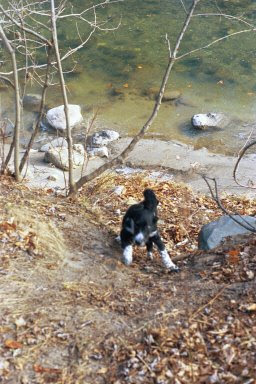 It came up suddenly while I was thinking of other things.

I had taken Lindsay for the full run along the top of the Bluffs from East Point Park to the water filtration plant about 3 kilometers away. We had begun in scattered sunshine but with a good breeze blowing off the lake.

I had returned from my latest visit to Princess Margaret Hospital with two titanium implants in my esophagus and I could feel them lodged in my throat whenever I swallowed. The markers would be used to aim the radiation therapy with greater accuracy.

Now that I'd taken the plunge into body piercing, I was wondering if tattooing was next in my future. Perhaps a dragon or a mermaid? Maybe get Linda's name tattooed on my forehead? Replace my wardrobe with Goth clothing? And so, occupied with these weighty considerations, I was tuned out to the natural world around me.

On her part Lindsay was deeply tuned into the natural world. Her entire attention intensely focused on each new smell and sound. Early on we had seen a deer. That brought me out of myself, momentarily. A young buck, it stood there majestically, calmly watching us watching him, before turning and bounding away, Lindsay hot on his trail.

Thinking back later, that was the last part of the walk I remembered before the thunder storm arrived with an earth reverberating crash.

The tallest object on the top of the bluffs in a thunderstorm is not what you want to be. And we were at least two kilometers away from the car.

The lightening was vicious and frequent, the wind ripped at my clothing, and the rain soaked us in a instant. Lindsay was dancing around my feet looking up at me as if to say, what do we do now?

There were really only two choices, find a place to hunker down or try for the car.

But really there was only one. A two kilometer run along the exposed rim of the bluffs would have been suicide. So we headed into some deep brush beside the trail seeking the densest and driest place we could find.

Ten thousand years of civilization were stripped away as we waited out the vicious storm. Nature had suddenly turned deadly and all we could do was sit and watch as millions of ancestors had before us. We were protected from the beating rain, but that rain would accumulated on the leaves above us and come cascading down as small waterfalls of warm water.

A wet and forlorn Lindsay was huddled against me, her back leg shaking uncontrollably. Eyes wide in fright.

I pictured the headline in tomorrow's paper, Man Dying Of Cancer Killed By Lightening Strike! Someone Up There REALLY Didn't Like Him!

Time stood still; but in the civilized world around us, in the thousands of dry suburban homes where the storm was only a minor annoyance out there, clock mechanisms moved smoothly forward unanimously clicking away twenty minutes, before the storm moved on.

The rain settled down to a light misty drizzle, and the thunder reduced to a distant growl, as we crept out and began our sodden trek back to the car.

I thought back to my concern about getting my feet wet in the Godzilla puddle last week. Now I was soaked to my skin and it was hard to get the keys out of my wet pocket. But finally I got them out and the car door open and we rejoined the safety of civilization. I cranked up the car heater.

I decided not to get tattoos after all. And hopefully no more piercings either.

I arrived home in a joyful mood to find a worried Linda.