My Adventures With The MRI Machine 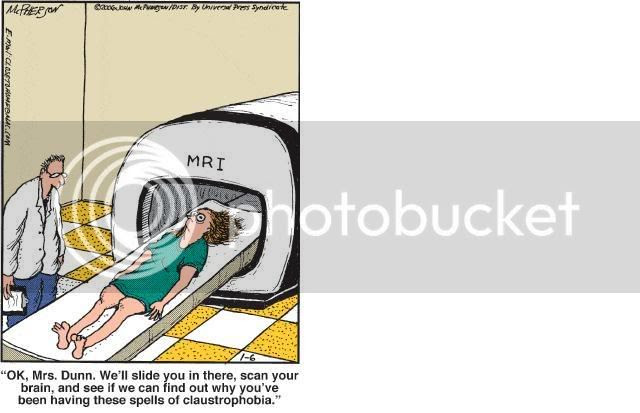 When last weeks PET scan showed an anomalous reading in the bones of my right hip, I was referred to the Toronto Western Hospital for an MRI scan. My appointment was for noon Friday but Linda and I were told to be there a half hour ahead of time.

And we were. And that was the last time anything went right for the remainder of the day.

The receptionist in the Medical Imaging Department was unusually picky. Not only did she need my medical insurance card and my hospital card, she also needed me to verbally verify my date of birth, the spelling of my last name, my street address and telephone number. I had no problem with providing the information, but when I've gone for other tests, those receptionists had been comfortable with double checking only one of those pieces of information. Still, I couldn't fault her for being thorough.

I was handed a two page medical history form to complete while I was waiting. Then the receptionist went for lunch. The waiting room was for outpatients requiring any of five different imaging tests and people were periodically called in for their appointments. When an hour had gone by without my name being called, I asked the new receptionist at the desk to make certain nothing had gone wrong with my appointment. And was assured nothing had. I just had to be a patient patient.

I was. For another half hour. Then I went back to check again. This time the woman at the desk checked with the MRI department and came out to apologize. The initial picky receptionist had failed to checkoff that I had showed up for the appointment. No one in MRI knew I was there. Had been there for nearly two hours by then.

They promised to take me next, but the scans take half an hour and someone else was already just beginning their scan.

I would just have to be patient. And I was. Kind of. But I was also annoyed.

Magnetic Resonance Imaging machines are serious business. If you have speck of metal in your eye or a pacemaker in your chest, the powerful magnets in the machine will simply tear them right out of you. Warning signs are everywhere. People with pacemakers or body piercings are running from the department in terror. 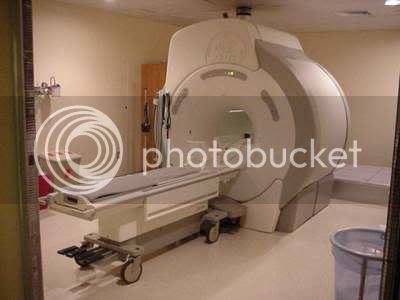 When I finally got in for my turn, I was asked to lay down on a table in front of an opening only just large enough to accommodate my body. Then my feet were taped together and a device was placed over my chest and two belts strapped it, and me, to the table. I was given ear plugs and a panic button to hold in case I got claustrophobic. I was told to relax. Then I was slid deep into the machine, my nose only a couple of inches away from its surface, my elbows needing to be protected by pads from scraping along the walls of the unit.

A cool breeze blew down the narrow tunnel in the machine playing at the edges of the hospital gown I was wearing. The powerful magnets, when turned on, could actually be felt as a gentle prickling sensation.

The machine literally roared to life with repeated blarings of a klaxon. And I was off for my first one minute exposure. Then another for five minutes, then six, then a couple more 5 minute exposures, all played out against rhythmic horn like blarings and grumblings played at the decibel level of an industrial site.

My arms began to ache, crossed as they were on my chest. I felt like an Egyptian Pharaoh encased in his sarcophagus, unable to move.

But eventually it ended and I was free to leave--for my next appointment to have blood drawn for further tests. Where I had to wait another 20 minutes for my turn.

Eventually we made it back to Union station for the GO train ride home, two minutes late for the train.

We had an hour to wait for the next one.

Then our train's departure was delayed a further ten minutes.

We arrived home at 5:15 to find a package waiting for us at the side door.

"Oh good," Linda said. "Its the books I ordered from Amazon. At least one thing's gone right today."

But the day still held one more trick up its sleeve for me. A voice phone message from my oncologist to say she had the results of the MRI and telling me I might want to give her a call, if I was home before 5 pm.

It was twenty after 5 by then and I desperately phoned but of course, given the way the day had gone, she had already left for the long weekend.

In her message she promised to phone me again later in the evening, or sometime over the weekend. I just have to wait for the call. For news that will send my life in one of two very different directions.

"Wait a minute," Linda said. "This package isn't for me, its for you."

"Me? I didn't order anything from Amazon."

I took the package and read the return address. It was from Reggie Girl, one of the two organizers of the Friday Photo Shoot Out, a woman who has recently been in her own battle with cancer.

I tore the package open to find a book by David Servan-Schreiber entitled "Anti Cancer, A New Way Of Life", and a t-shirt identifying me as a Friday Shootout Gang Member.

In her dedication in the book, Reggie Girl writes that she hopes I find the information in the book as informative and influential as she had: "Isn't it funny how we found each others blog. God works in mysterious ways my friend..."

He does indeed, Reggie Girl.

And I realize her kindness has magically wiped out the frustrations of the day. However, the way the day had gone, I might just prefer to hear my oncologist's news tomorrow.