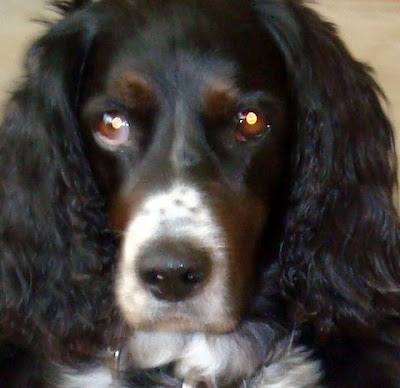 Spring has come to West Hill and Lake Ontario basks in the the unusual warmth of the day. Sail boats and yachts have begun to make their appearance on the vast quiet waters. Seagulls, Canada Geese, ducks and loons swim in peaceful company with each other, while sandpipers run noisily along the beach and swallows perform a delicate ballet in the skies above.

Barry and Lindsay both stand on the top of the tall bluffs marveling at the sight, their bodies warmed by the early morning sun. Behind them in the meadow red winged black birds sing to each other as they fly from tree to tree. An incredible harmony has come to the world and Barry is reluctant to move on.

But Lindsay has less patience and much more energy to spend. She turns back to the trail and runs off along the path, soon lost behind bushes now thick with leaf and flower.

And Barry reluctantly turns away from the view of the Lake and follows her up the rise, the gathering heat of the day making him regret his earlier decision to wear a jacket.

He has a lot to think about these days and is soon lost in thought, the rhythm of his steps like a crude form of walking meditation. It isn't until he reaches a fork in the path that he realizes he has not seen Lindsay since his pause to take in the view of the Lake ten minutes before.

Suddenly he is alarmed. While Lindsay loves the freedom of being off leash, and loves to explore the infinite variety of scents the meadow offers, she is never far away and is always checking in every minute or so.

She had headed off along the trail before him but he doesn't remember catching up to her. Of course she could have been off the trail in the bushes as he passed by. But if she had continued to go ahead, which fork in the trail had she followed?

He decided to wait and let her come to him. With the rising of the sun, a slight breeze had begun to pick up and the leaves of the bushes were now in gentle motion. Swallows rode the breeze high into the sky in search of insects. A huge V formation of Canada Geese soared by overhead, the squeak of their muscled wings clearly audible.

But still no Lindsay.

Barry was just about to backtrack to see if he could find her, when he heard the jingling of her collar and a bright eyed, tail wagging, black springer spaniel came plunging along the path toward him.

But no matter how fast she ran, the reek of whatever rotted mass she had been rolling in reached him first.

And nearly knocked him over.

"Arrugh! Lins, what have you done!" He was appalled.

Lindsay excitedly danced around his feet, wanting to share the joy of her new perfume.

"Ah, Lins. Okay. That's it for us today, we're going to have to get you home for a bath!" And he set off back down the trail to the parked car, nightmares of the interior of his car filling with the stench of rotted corpse, lighting up his brain.

At the parking lot the car had been baking in the warmth of the day for nearly an hour. He rolled down all four windows half way and got Lindsay into the back seat. Visions of air fresheners that look like pine trees and dangle from the front mirror of pickup trucks, danced seductively in his brain.

He pictured Linda's joy as he opened the door and Lindsay ran in to share her new scent with a fellow female. Lindsay anxious to just be girls and share beauty secrets.

Slowly he pulled out of the parking lot and headed over the railway tracks and turned the car toward home. He drove north on Beechgrove and turned west on Coronation Drive until a loud "Whoop! Whoop!" sound drew his attention to the rear mirror and the police car behind him, lights flashing!

What the... He checked the speedometer and found he was only slightly over the posted limit. Not enough to get him pulled over on a normal day. Today, however, was rapidly loosing its normalcy.

He pulled over and the officer lumbered toward his car. Barry rolled down the side window even further.

"Morning," said the officer, "Can you tell me the date of your birth?"

What was this, a quiz? Did the police now randomly check drivers for Alzheimers?

"And what month is this?" the officer asked and Barry suddenly knew why he had been pulled over. With the cancer scare, emergency surgery and numerous hospital tests, he had forgotten to renew the annual sticker on his car license.

Barry started to explain about his situation when the officer withdrew his head from the window in horror!

"Arrugh," he gasped, "What's that stench! Have you got something rotting in the trunk?"

Suddenly afraid, and picturing the policeman imagining dead bodies hiding in his trunk, Barry tried to explain. "No, no its my dog!"

"Your what?" The cop stuck his head back in the window.

And Lindsay took the opportunity to stick her head between the head rest of his seat and the car frame to lick the nice officer on his large nose.

The officer, not expecting the head of a dog to appear so close to his own or a warm, wet tongue on his nose, screamed and plunged back out of the window, hitting his head on the car frame and knocking his hat off.

The officer then said some unpleasant things.

And Barry still had Lindsay to take home to Linda.