The Day Lindsay Met Santa In The Forest 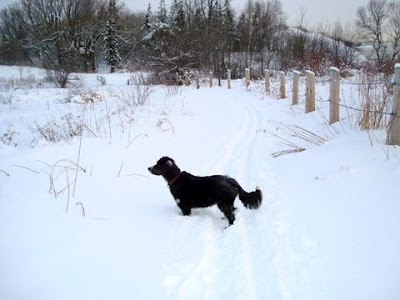 The noise came first. A thrashing, pouncing, rushing sound coming out of the deep forest to our left.

Lindsay froze, tail stiff, legs braced as she turned to face the on coming rush.

Then snow began to fly and a bright pink nose bounded out of the woods.

Closely followed by the large pure white Labrador puppy to which it was attached. The large and friendly puppy was a frenzy of glee, bowing toward Lindsay, tail whirling like a helicopter blade.

Lindsay relaxed and returned the bow, her own tail coming to life, and the two of them were suddenly off on a game of chase through the mounds of snow.

"Rudolf! Rudolf!" A deep and hearty voice bellowed from a distance. "Rudolf, where are you dog!"

The two animals went racing off toward the sound of the voice.

I rounded the large tree growing in the path ahead of me, and came face to face with Santa Claus. There was no doubt who it was, with a large Santa hat perched on top of his white bearded face. Of course the rest of him was dressed in a more contemporary style, a heavy gray scarf, a long winter's coat made from some form of leather and Cossack boots. He held a thick staff in his right hand and leaned on it as the two dogs tore about at his feet before they dashed back off into the woods.

"It's a beautiful day out today," I said, not knowing what else to say to Santa in his off time.

"It is, it is," the old man replied, nodding his head toward the two animals. "The dog's name is Rudolf. My wife named him. Me with my white beard like Santa and him with his bright pink nose. She thinks its funny."

"Oh, alright," the old man laughed again. "It is funny. Maybe I'll shave the beard off one day and confound her!"

"Oh don't worry," his eyes twinkled above his bushy beard. "Even I wouldn't know who I was without my beard. You know I was Santa for a couple of years up at the Mall. Most fun I ever had. At work."

The two dogs came tearing past us again, whirling around our feet before racing back off into the woods.

"Look at them go," Santa said. "I sure wish I had their energy."

"Well, I guess I better get going. Nice meeting you."

"Oh heck, that's an everyday experience for me. You be well now," He suddenly said with some seriousness.

He called Rudolph's name again, and set off down the path, leaning heavily on his staff.

Within minutes Lindsay was back around my feet, looking up at me to see if I appreciated all the fun that had just taken place.

I gave her a pat on her head.

"Have I got a story to take home to Linda." I told her.