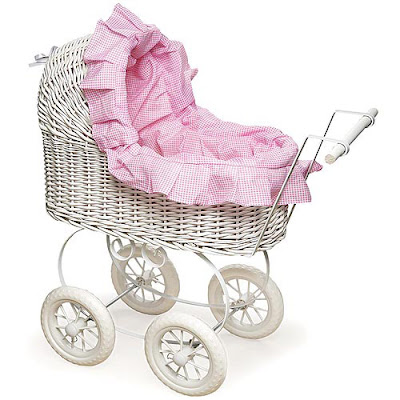 It doesn't really resemble this photo. For one thing, it isn't painted and it isn't lined. But it has been in our family for nearly 40 years and has been loved by all our children, grandchildren, nieces, nephews, friendly visitors.

However, although it was one of the most loved of toys and one of the most used, and although we have stacks of photos of messy play rooms from down through the years, and I have searched through all of our albums, I am unable to find a single photo of it. It was always where the mess wasn't, I guess.

The wooden wheels squeak now, but otherwise it has been remarkably resilient to the passage of time. And the rough treatment of babies.

I'm not certain how we came by the wicker baby carriage, except that it originally belonged to my oldest daughter Kathy, who would load it up with dolls and parade it around the house. In her younger years the dolls were unceremoniously dumped into the carriage and only as she grew were they tucked in with any tenderness.

The little carriage inspired grandmothers and great-grandmothers to create blankets and sheets and pillows, which would almost immediately get dumped on the floor so more babies would fit within.

On Sunday we dusted it off and took it as a gift to my 16 month old granddaughter Hailey. We baby sat her for the afternoon while her parents took their older son to see Toronto Symphony's version of The Christmas Carol.

At first Hailey looked at it with some suspicion, toddling around it and poking at the baby within. Then taking hold of the handle and tentatively pushing it on squeaking wheels.

Before dumping the baby out and then picking it back up again and throwing it back into the carriage on its head.

Exactly as her mother Kathy had done to a similar baby over thirty years before.