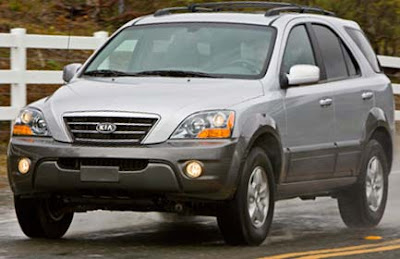 My brother John's SUV cuts through the snow packed streets in the dark of early morning with calm assurance. Linda and I are bundled comfortably inside listening to the radio playing softly in the background and joking with John about the news of the day.

I'm on my way to Princes Margaret Hospital for my third cycle of chemotherapy and Toronto has just been hit by the first winter storm of the season It is very early and the streets are yet to be packed with commuter traffic. Toronto's 600 snow plows and 200 salters have been out all night grooming the roads and we are driving through an ugly slush, not ice or snow.

The traffic flow has locked us into proximity with a "Shred It!" truck which is changing lanes periodically without signaling and speeding up and slowing down erratically. At one point it even pulled into a "No Stop" zone in front of us, put on its 4 way flashers and came to a complete halt. Blocking us in the lane behind it for several minutes until the traffic cleared and we could pass.

"Well, at least we've put him behind us," said John.

Only, 5 five minutes later he was back beside us again.

Despite the traffic and the storm and the "Shred It!" truck, John got us to the hospital only 10 minutes later than usual. Much faster than the nurse who was to administer my taxol. The traffic delayed her by over an hour, as the chemo waiting room filled to capacity and it was nearly 10 when we were called in for my treatment.

Although armed with two books, a kindle, an ipod filled with music and Linda for company, I slept through most of the 5 hour procedure. I'm getting bored with chemo. Bored with cancer. Bored with nurses and Princess Margaret Hospital. My explorer's nature wants always to move on beyond what I know and into the new.

Chemo is no longer new. It is become predictable. After today I will have three days of fatigue, then the side effects will begin. My joints will start to ache like a moderate case of arthritis, the glands in my neck might swell, I will start to loose more sensation in the tips of my fingers and the bottoms of my feet (a sensation loss I might never recover) and I would develop a chemo allergic rash across my head and down my body that would require Aveno baths twice a day and Benadryl (on top of all my other drugs).

Finally I would have a couple of weeks of freedom and relative normalcy as I recover my strength prior to the next cycle.

My MEDS program (Meditation, Exercise, Diet and Stress Reduction) is working well. It is largely focused on keeping my immune system from being too impacted by the taxol. During my previous cycles of chemo, in the summer, my immune system got dangerously low. So low consideration was given to discontinuing chemo altogether. This time around it was a healthy 3 after the first cycle and a near perfect 4.7 (a reading of 5 would be ideal) this time.

By 3 oclock we are finished and John arrives to drive us home. Outside the temperature has warmed up and the snow has turned to rain. We again beat the rush hour traffic on roads that are now only wet.

Lindsay greets us at the door as we arrive home. She has been cheated out of two days of walks and will get only short walks over the next few days as my post chemo fatigue settles in like a heavy weight.

Only the weight now has a new name for me--boredom. An old enemy. Too familiar and too boring. I will have to give it some thought. But for now, I'm very tired and have a lot of sleeping to do.