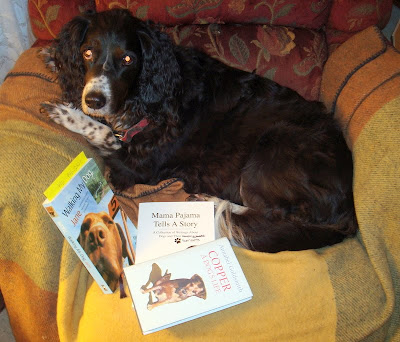 Her dad may have his nose buried in a Kindle, but Lindsay prefers traditional paper books. Books with feel. Books whose spines crackle when opened. Books that can be picked up and read anytime and never need to be plugged in.

Fortunately for her various bloggers have kept her little life enriched with reading material.

Cindy from Alaska introduced her to Ned Rozell's extraordinary dog Jane ("Walking My Dog Jane")who hiked the entire length of the Alaska pipeline from Valdez in the south to Prudhoe Bay on the shores of the Arctic Ocean. Along the way they not only encounter Alaska's rugged geography, her amazing cast of iconoclastic characters who live in your memory long after the book has ended, her incredible wildlife, but come to know and trust each other with that special bond between man and dog and stretches back thousands of years into the prehistory of China.

If Jane explores the natural wilderness of Alaska, filled with the natural sights and smells of the Alaskan wilderness, Annabel Goldsmith's dog Copper has learned to explore and feel at home in the strange civilized world modern man and dog have made for themselves in the very heart of the British Isles. "Copper, a Dog's Life" was a gift from Sara Diane Williams in the UK and it tells the story of a dog who has learned to use life's modern conveniences to his own advantage. Copper would think nothing of hoping on a bus to go down to his faviourite pub in the evening, sometime escorted by his good friend Jessie the cat. Or, if the wanderlust really took over, he would travel to Richmond, Kingston or Brighton.

In her hilarious book, "Mama Pajama Tells A Story", blogger Patience Renzulli set out to buy a dog. Just one. After much searching and researching she eventually found a Whippet named Evil and Evil spoke to her in a way no other dog had. Evil often does that to a person, even when that person decides to rename Evil Gracious. And although Evil started out to be an only companion for Patience before long Evil (er Gracious) had been joined by eight other Whippets and Patience (and her husband's) lives were transformed.

Lindsay and I are only just getting into Patience adventures with her pack, but she is already whispering in my ear, "No we do not need another dog in the house--or another eight. And I'm getting too excited listening to other dog's adventures. Isn't it time to go out and have one of our own."

And so we shall.