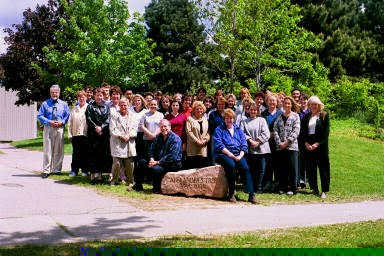 The Toronto newspapers this morning are filled with stories of murders, rapes, beatings, political skulduggery, and Tiger Woods' infidelities (hands up the lone woman who hasn't had an affair with Tiger).

It's enough to make you very discouraged about humanity.

The "norm" goes unnoticed, unmentioned. But by ignoring the norm, by definition you are distorting reality. Big time.

And it was an out pouring of generosity that greeted Linda on her return to work yesterday. Not only were there embraces all around from fellow teachers, but the children were ecstatic to have her back.

And as a token of their joy, the teachers at her school had done an exceptional thing. Because, you see, exceptions run in both directions, the good and the bad. Despite what Newspapers would have you believe.

The exceptional thing the teachers at Linda's school had done was to individually each cook us a meal from their favourite vegetarian recipe. Linda arrived at school to find boxes and boxes of dinners and lunches all prepared for her. To help ease her way back into the work force after 8 months of caring for me.

Of course, its surprising just how many people consider macaroni and cheese their favourite vegetarian meal. And in just how many ways it can be prepared.

But we literally don't have to do anything other than heat up a pre-prepared meal for the next month.

The world is awash in good people.