The GO Train From Hell 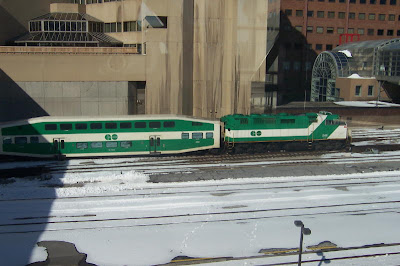 With a Thursday visit to the Oncologist looming before me, and beyond that three months of combined chemo and radiation therapy, this may be my last Monday at work in a very long time.

I have a strange job with few routines, although I usually find myself at our headoffice in downtown Toronto one or more days a week. When I go downtown, I seldom drive because parking alone is much more expensive than public transportation. Instead I take a combination of the the GO commuter train and the subway. Timed right, I can get from my house to my desk in under 45 minutes. The same on the way home.

These are usually uneventful trips, boringly routine, where I can relax and read a book.

However, there was one Monday last summer when I arrived at Union Station to discover the 5 pm GO had been canceled due to mechanical problems. The 5:30 Express to Oshawa had been changed to a local run to accommodate. That meant an extra half hour to wait and two train loads of rush hour commuters crammed into one train.

The hoards and I lined up and squeezed ourselves into the train, whose sides (I'm sad to say) did not bulge out like in cartoons. Normally I'm guaranteed a seat and can relax and read my book, but no such luck on Monday. Naturally, it was one of the hottest days of the year and the air conditioning was out in the car I chose and before the doors closed people were already fanning themselves. Because the air conditioning is supposed to work, GO train windows don't open.

Suddenly my bad luck turned for the better when the woman I was standing beside suddenly turned green and leaped from her seat and pushed her way through the crowd just as the train doors began to close. She was last seen throwing up in the garbage bin on the train platform as we pulled slowly out of the station.

There were three other people in our little area, all a little shaken by the heat and the dramatic exit of the ill woman. They included a very serious black businesswoman with thick rimmed glasses, a young pretty blond and a heavy set woman with short cropped white hair.

To break the tension, I said something funny about the heat and the unfortunate woman who had just vacated the train. The women smiled ruefully.

That only encouraged me. So I said something even funnier about the GO service. and now they laughed. In the seats across the isle I could see the people pretending not to listen and was encouraged even further to say something even funnier. And the woman across the isle who had been sipping a coke snorted and blew cola out her nose in a refreshing spray. Now everyone seated and standing was laughing.

But realizing my powers had dangerous side effects, I decided to say no more. And no one else picked up the thread of conversation.

The hot train chugged on deeper into suburbia.

The serious black woman opened her briefcase and began working on a document. The pretty blond took out her cell phone and began calling friends to tell them about her nightmare train ride. The heavy set woman next to me either closed her eyes in meditation or had died.

I was fascinated by her. In favour of death, she didn't seem to be breathing. In favour of meditation she was still sitting upright.

Everyone was sweating and fanning themselves but as we reached station after station the crowds began to thin and I eventually reached Guildwood alive.

After dragging my weary body out of the broiler into the cooler air on the platform, I looked up at the train windows as it pulled slowly out of the station with its burden of sweating commuters and caught the white haired woman looking out at me. She, too, was alive! Suddenly she smiled and waved.

I waved back. We had become friends through adversity, too late. And it was never to be.

And that's how I got home from work that Monday.