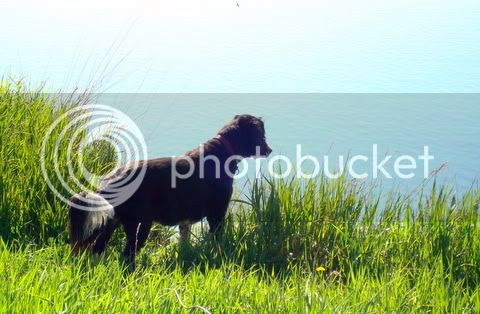 A car full of teens roars out of the East Points parking lot, rubber tires smoking. They shoot past me a great speed and hit the small climb up to the train tracks with enough momentum to get air. I hear them land on the other side and the squeal as the driver fights for control before the sound of the car fades into the distance.

Being early in the morning the parking lot is empty of other cars and the tarmac is burned with the memory of successive wheelies. All three of the garbage bins have been mangled, knocked over and garbage is scattered everywhere. I recall a fleeting glimpse of the damaged front end of the Honda Civic and can now tell how that happened.

With someone else's car.

I pull out my cell phone and call police. A lot of Lindsay's walk time is eaten up talking with them.

"Kids today," says the Officer in disgust. "I don't know what's the matter with them! They have no respect for anything."

Lindsay's patience has run out and she pulls me away and down the trail to the beach at the bottom of the bluffs. There is a warm breeze in my face and the waves echo against the bluffs as they crash onto the shore. A flight of geese circles overhead. My feet sink into the sand as I walk.

Gradually my anger eases and lets go. Since beng diagnosed with cancer three weeks ago, I've been spending more and more time here. Out in nature, muscles moving, I somehow feel more connected. More at peace.

I think back to an article I was just reading about the staggering divide between children and the outdoors. Child advocacy expert Richard Louv directly links the lack of nature in the lives of today's wired generation (he calls it nature-deficit disorder) to some of the most disturbing childhood trends, such as the rises in obesity, attention disorders, violence and depression.

His book is called "Last Child in the Woods" and is the first book to bring together a new and growing body of research indicating that direct exposure to nature is essential for healthy childhood development and for the physical and emotional health of children and adults.

My brothers and I grew up playing in the bush at the end of our street. We climbed trees, rolled down hills, caught toads and frogs, built rafts, brought home the blue shells of robin's eggs, swam in the river.

Ate my parents out of house and home, went to bed exhausted and slept the night through. And were as skinny as rakes.

As Louv says, "Within the space of a few decades, the way children understand and experience nature has changed radically. The polarity of the relationship has reversed. Today, kids are aware of the global threats to the environment—but their physical contact, their intimacy with nature, is fading. That's exactly the opposite of how it was when I was a child.

"As a boy, I was unaware that my woods were ecologically connected with any other forests. Nobody in the 1950s talked about acid rain or holes in the ozone layer or global warming. But I knew my woods and my fields; I knew every bend in the creek and dip in the beaten dirt paths. I wandered those woods even in my dreams. A kid today can likely tell you about the Amazon rain forest—but not about the last time he or she explored the woods in solitude, or lay in a field listening to the wind and watching the clouds move."

I'm not convinced Louv has the whole answer, but as I watch the swallows soaring overhead, I have to think he's on the right track.

She is a truly masterful writer with a wonderful gift for mood and characterization.