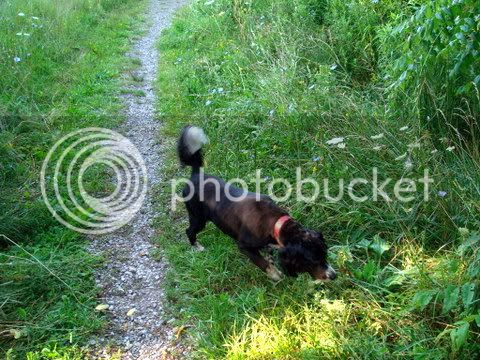 It is a shame Nature had to put that vast machinery to work around Lindsay's poop; but then, it seems Nature likes a practical joke as well as the next guy.

In those days my stepbrother Norm would come for dinner every Tuesday and he would always bring a treat for Lindsay. The treat on that particular occasion was a large bone-like object coloured a brilliant yellow with black spots. Eating it not only distracted the dog for an hour, but also cleaned her teeth and sweetened her breath.

Lindsay loved it and had it devoured in next to no time. Did you bring anything else for me Norm?

And that was all there seemed to be to that story.

Except. The great wheels of Nature were still turning and the joke was not yet sprung.

Now you have to know I am a conscientious poop n scooper. Whenever Lindsay and I go for a run, I bring along several bags for the purpose, which go into our city compost box. I am committed to this and religious about the practice.

Except, the next morning, in our house everything seemed to be going wrong, everything was in chaos, and I was greatly delayed in getting Lindsay out for her run. We made it, but only just.

Within minutes of setting out along the top of the bluffs, the frustrations of the day had melted away and order seemed returned to the world. Which it had, but just not the order I had expected.

About half way into our run, Lindsay stopped for a poop.

In the middle of the trail. The very middle.

I reached into my pocket for my poop n scoop bag and found my pocket empty. I had forgotten to bring a bag. The chaos of the early morning had reached out to touch our lives. And Lindsay's poop seemed to be taking forever.

When she was finally finished, I was astonished to find the poop resembled the odd treat Norm had brought for her the day before. It was coloured bright yellow with black spots.

And sat, as I mentioned, in the very middle of the pathway.

So we spun around and returned to the car. Passing no one I would have to warn not to step in the strangely coloured concoction that lay smack in the middle of the path.

We successfully retrieved the bag and were on our way back to the scene of the crime when we noticed a large crowd of Indiana Jones look-alikes encircling her poop. The Federation of Ontario Naturalists take people on guided tours of the meadow on the top of the bluffs and this was obviously such a group.

They were excitedly gathered around Lindsay's poop, in animated conversation.

In fact the group leader was taking out a specimen bag and gathering up the evidence. I could hear him assuring the group that he would relay the results to them as soon as the specimen was analyzed.

I know, I should, at that point have spoiled Nature's joke. I should have told them what they had found and how it had come to be.

After all, who am I to spoil Mother Natures little spoof after she had worked so hard to produce it?

So Lindsay and I just walked past the little group, many of whom were busy snapping pictures of the exotic find, and said our good mornings and continued on our way.

For reasons unknown to me, the day seemed a little brighter after that. And I didn't have to carry a bag of poop back to the car.

Mother Nature and I, what a couple of practical jokers!