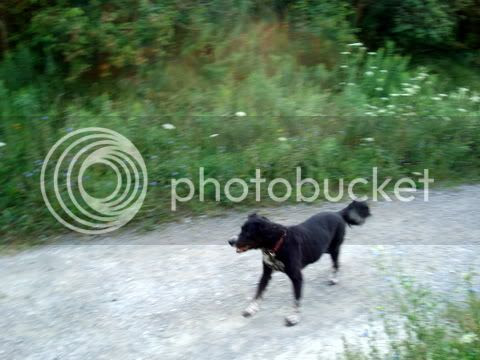 Like all dogs, Lindsay is a creature of habit. She is acutely aware of life's routines and feels most comfortable deep within them.

She can never predict when she will be taken for a long run along the bluffs and when she will just be gong for a short walk through the neighbourhood.

And the normal smells of cooking are becoming a thing of the distant past. She can no longer remember the last time she smelled a steak cooking. Or even a hamburger. All meals now seem to consist of soup.

The phone never seems to stop ringing, tying her mom up in long and quiet conversations. Conversations that have their share of laughter but also, when her dad isn't home, often bring her mom to tears.

And she has never seen her dad gagging and throwing up before as he struggles to keep the most bland liquids down.

It worries her, this sudden change within her home, within her life, within the adults she loves and wants to protect.

So she has started to do some very unLindsay-like things.

She has never been a lap dog. She is too big to fit on anyone's lap and it just isn't in her nature to want too much cuddling and petting. Playing is more her thing.

But she has taken to hopping up on the couch beside her dad and resting her head in his lap. She sits and watches him as he sleeps, her face inches away from his own. And when he wakes she reaches out her tongue and licks his nose with great tenderness.

Until he bellows, "UGH! Lins what are you doing, girl! Yipes, stop that."

At night she has always slept on the floor at the foot of their bed, but now she lays through the night on the floor beside her dad, so that when he wakes up in the morning he has to avoid accidentally stepping on her, not being used to finding her there.

So it isn't all bad. And a dog has change her thinking and learn to adapt.