The Friday My Home Town Shoot Out theme this week is "In Remembrance", a topic chosen by ChefE. Saturday being my mother's funeral I can't think of a more fitting time for reflecting on her life. What follows is part one of a very abbreviated version of an autobiography she wrote for me back in 1989. Tomorrow Sepia Saturday will feature part 2

My name is Rosanna and I was born in Mitcham, England to Captain George Shepherd and Rosanna Staines. I have a sister, Eileen and a brother, Ted. We first lived in rooms over the Star Pub which was owned by my grandfather then later moved to London Road.

Back in those days there was no electricity and I loved to sit in the window in the front room and watch for the lamp lighter to come along to light the street lamp opposite, and beside the Pawn Shop, with it's three brass balls hanging beside the door. When my brother Ted was born and Eileen and I were a little older, my dad divided our bedroom into two rooms so that Ted had a little room of his own. 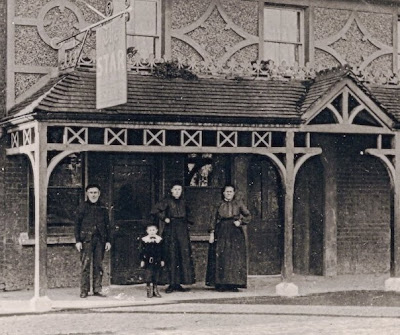 Our first home was in rooms over the Star Pub

We grew up next to a butcher shop which had all these the poor animals outside waiting for slaughter and was such a sad experience that I have been a vegetarian all my life. 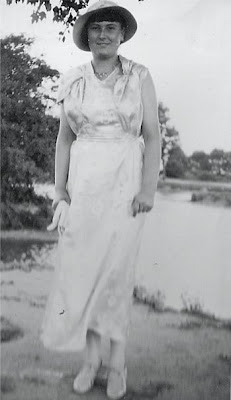 Rosanna age 20
My parents first home was heated with a Valour Perfection lamp and our bed was heated with a brick that had been heated in the oven and wrapped in a towel. There was no bathroom but we did have a flush toilet only it was downstairs and outside. On one fine day my mother restained the toilet seat but forgot to tell dad who sat on it while it was still wet and ended up stuck to it. Mom had to use turpentine to separate the toilet from his bottom. 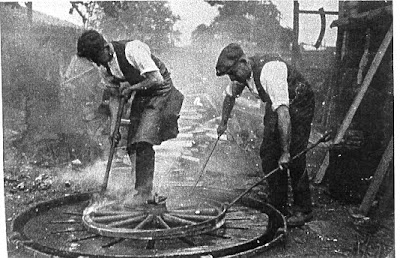 "Up The Yard" The Shepherd Smithy
Eileen, Ted and I use to play "up the yard" where dad, Grandfather Shepherd, and uncle Fred worked. The forge in the blacksmith shop was lovely on a cold winter’s day, especially when we were old enough to jump up and reach the bellow's handle. 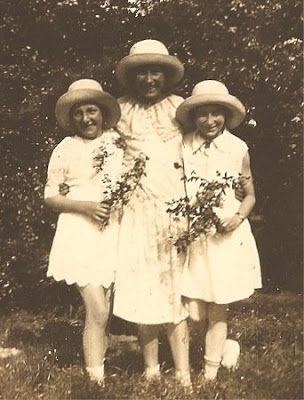 Eileen, Rosanna and Mary
On one occasion, we three children played "wedding". Lana wore a white lace curtain, Ted was the groom and I played the horse who pulled them in a wooden wagon that dad had made for us. Incidentally, many, many years later, when I "developed my female anatomy" my siblings called me "three brass balls". Another nickname I had in school was "steamroller".

However I was a pretty good student and became head prefect for a couple of years. Being England it was, of course, an all girl's school and I once played the lead in our school's production of Hiawatha. 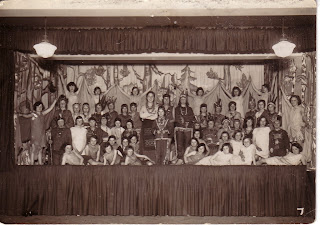 Rosanna (center stage) as Hiawatha in her School's Production

I was reading a novel recently in which the characters move to Bundaberg, Australia. One character asks another what there is in Bundaberg, and is told that it was the home of the famous aviator Bert Hinkler. The name leaped off the page at me, because I had met Bert. Twice a year my family would go to visit cousins Henry and Maggie Staines in Lympne. They lived in a bungalow named "Ingleside" next to the airport and Bert Hinkler use to room with them. 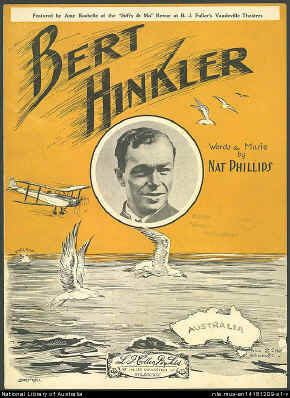 When he wanted to go flying, he would just jump over their backyard fence and walk across the field to his plane. I was about 5 years old at the time and Bert had the first radio I had ever heard. You had to wear ear phones to hear anything and he would let the children listen. Bert was famous as the first man to fly from England to Australia. He died a few years later, in the mountains around Florence Italy, attempting to recreate the trip.