The Swan In Irish Mythology 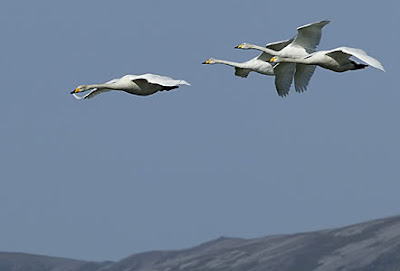 I heard the honking first and saw Lindsay come to a halt, tail up, ears cocked, legs rooted to the ground.

Then a massive white bird, its long neck stretched before it, came swooping overhead. The pure sunlight of early morning played tenderly among its feathers as its great wings beat with an audible woosh. Three beats of its wings and it had crossed the small expanse of open sky above the tree tops. And was gone.

Before Lindsay even had a chance to bark.

She looked back at me as if to say, "Did you see that? Have you ever seen anything like that before?"

"Not in flight, Lins," I would have told her. "Swimming in ponds or on the lake, but never in flight like that."

It was like the soul of a Canada Goose in flight, or its ghost.

Then I thought, and where is my camera? My beautiful new camera?

It seemed a very appropriate day to see a swan in flight. Along with the shamrock, the leprechaun and the harp, the swan is a symbol of Ireland. In the legend The Wooing of Etain, the king of the Sidhe (subterranean-dwelling, supernatural beings) transforms himself and the most beautiful woman in Ireland, Etain, into swans to escape from the king of Ireland and Ireland's armies. The swan has recently been depicted on an Irish commemorative coin.

On behalf of my Paternal Grandmother, Katie O'Connor, let me wish you all a Happy St. Patrick's Day.