The One Eyed, One Kneed, Left Handed Vegetarian 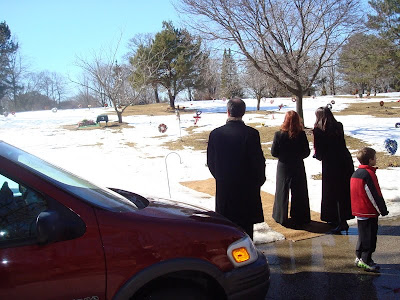 We came in stately procession but left as individuals, no longer united in our grief.

Over 100 people attended my mother's funeral but only immediate family accompanied her to the graveside on the still snow covered, and dangerously slippery, cemetery hill.

Here, final prayers were said as we clung to each other to maintain our footing.

We each left a rose with Rosanna and stood, for a moment, alone with our memories, before the Minister thanked us all for coming and announced the conclusion of the formal service. Then she and the funeral director gingerly descended the hill to the black limousine that had led us here.

While we were at the graveside, the limo driver, who waited for them, had removed the funeral signs from all of our cars. On the way back to the funeral home the director would stop and leave the huge family bouquets in the lobby of the Retirement Home where mom had lived for the past several years. 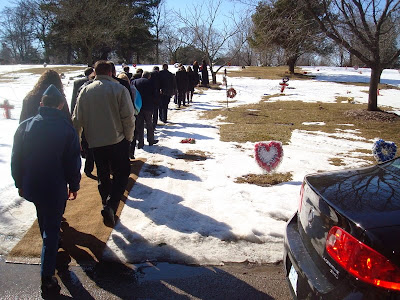 "Well," my oldest daughter said to me, approvingly, "She's with Poppa again."

Soon only one person is left beside the grave, alone with tears she had held back for so long, refusing to leave her Nana until the grave had been properly filled in.

For a while my brothers and I stand vigil with her, standing beside our cars at the bottom of the hill. We discuss many things, including meeting for coffee at a nearby restaurant.

And then, as the maintenance truck from the cemetery arrives to begin filling in the grave, I get behind the wheel of our car and pull away from the snow covered hill into the spring like weather and greening grassy plains of the vast cemetery.

Leaving behind the "one eyed, one kneed, left handed vegetarian", as my mother had recently taken to calling herself, together again with her husband Bill.