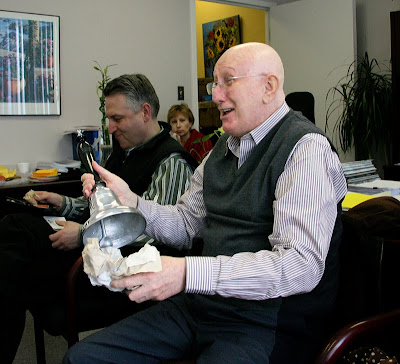 I'm lying naked on the kitchen table covered by a thin sheet while the large man walks slowly around me shaking his head.

The vividness of the memory is jolting, even after all these years.

Last Thursday I was having lunch with a couple of friends from work, who were not able to make my recent retirement celebration when I was given the large bell in remembrance of my 30 years at Family Service EAP. The conversation, as most of my recent conversations tend to do, had turned to medical matters and the image of me on the kitchen table had come reaching up out of the long forgotten past with considerable power.

"When I was four," I told my friends, "I had my tonsils out, at home, on the kitchen table."

The waitress at the Marriott was busy efficiently refilling my coffee cup and checking to see if the two women are in need of anything else.

"Where was this?" Linda asked, "Did you live out in the country?" Linda is my work colleague, not yo be confused with Linda my wife. I have a lot of Lindas in my life.

"No, we lived right here in the city. In East York." I said. "I guess, for low risk surgeries, it was cheaper than doing it in the hospital."

"I can clearly remember him checking me over before the operation, turning to my mother and saying, 'Why this boy hasn't been circumcised! That just isn't clean. He'll have terrible problems as he grows up. We'll have to do that as well.'"

"So you were circumcised and had your tonsils out on the same day, on the kitchen table?" asked Linda in astonishment.

"Well it was a near thing. There was no medical insurance in those days and my parents had to pay cash. They weren't wealthy and I think the surgery was costing them a fair bit. Come to think of it, maybe it was because of the cost that it was being done on the kitchen table instead of in the hospital. In any event, I remember quite the negotiation going on about the price."

"While you're laying there on the kitchen table?" asked Robin.

The image is alive now in my mind. I've been sick for weeks, my throat in terrible pain. I'm four years old with little understanding of everything that is taking place. Finally the doctor and my parents reach an agreement and the doctor returns to me.

"Okay, little feller," he says. "We'll soon have you fixed up. Have you ever been to the dentist?"

I shake my head.

"Well we're just going to put you out the way the dentist does when he pulls teeth. Don't worry you won't feel a thing."

Linda and Robin shook their heads. All around us the diners at the Marriott were chatting quietly and laughing with delight at the various amusing stories that were being told.

"You got that right," said Linda.

Our conversation turned to other things and sixty-three year old memories returned to the vault where they belong.