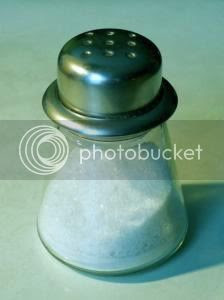 This eating healthier can become obsessive. It can also be frightening.

Do you read the labels on things? I don't, or didn't.

I thought to myself, maybe I should start to watch what I'm eating.

So I started eating salad for lunch but with this winter's extreme chill, cold salad wasn't proving very appealing. That led to my thinking of soup as a kind of hot salad (that's how my mind works). Except that a friend warned me not to eat soup because it contains way too much salt.

So what? Salt is good for us. Salt contains iodine. Good people are "salt of the earth". Of course you can over do it like Lot's wife, but I seldom put salt on anything. So where was the problem, buster?

The problem is that Statistics Canada estimates that Canadians routinely ingest more than double the recommended amount of dietary sodium per day. Even though a blue-ribbon panel of experts commissioned by the U.S. Institute of Medicine has set the adequate intake of sodium at 1,300 to 1,500 milligrams and an upper limit of 2,300 milligrams (less than a teaspoon), the average Canadian adult consumes at least 3,100 milligrams of sodium per day. To me that looks closer to three times the recommended "adequate" amount, not two.

Dr. Stephen Havas, vice-president of the American Medical Association, has estimated that cutting the amount of added salt by half in processed and restaurant foods sold in the U.S. would prevent 150,000 premature deaths annually; similar action on our side of the border would likely mean 15,000 fewer Canadian lives lost.

If so, this is at least four times the number of deaths attributed to trans fats. And a British Medical Journal study concluded that a low-sodium diet reduces the risk of cardiovascular disease by 25 to 30 per cent.

The problem is sodium also hurts our health-care system and our economy. According to a new study published this month in the Canadian Journal of Cardiology, reducing added sodium may lead to 1 million fewer people with hypertension. Direct cost savings from fewer physician visits, lab tests and lower medication use were estimated at $430 million annually, not including the spared treatment costs and productivity gains that would come from preventing disabling and fatal salt-related heart attacks and strokes.

The actual intake is likely closer to 4,000 milligrams when we include salt added at home at the table and stove, and consider the tendency of people to under-report their salt intake. The insidious effects of so much sodium added by food manufacturers and restaurants are particularly striking when one considers the intake levels of young children: toddlers ingest an average of almost 2,000 milligrams of sodium per day – double their recommended intake. According to Statistics Canada, these tots rarely lay a mitt on a salt shaker; for them, food comes salty.

Because four-fifths of dietary sodium is actually added by food manufacturing plants and restaurant kitchens, the American Public Health Association has advocated companies reduce by 5 per cent per year the amount of salt they add to such foods over 10 years. Which seems a criminally modest goal to me.

Dr. Norman Campbell, University of Calgary Research Chair in Hypertension Prevention and Control, is now calling for dietary sodium to be closely regulated.

I just finished eating a poached egg and tomato sandwich for breakfast. The bread had 160 mg of sodium per slice, a touch of mayo added 70 mg, the eggs themselves had 63mg and bit of ketchup added an additional 140 mg.

To save you the math, that adds up to 590 mgs of sodium. Nearly half an adequate daily allowance.

And I never touched the salt shaker once.

So what's wrong with the word verification feature today? I've visited several blog without being able to leave comments because the WV won't load.

Additional Information from the Toronto Star.