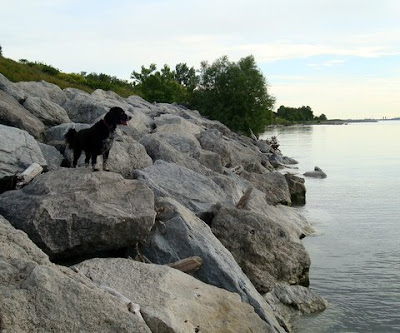 It rose up above the hill to the left of us bringing Lindsay to a complete stop. A skidding, sliding, sit on your bum in amazement kind of stop.

The very crest of the hill in front of us was growing, lifting, rising higher into the air. Then falling back to its normal height, returning life to normal as if the impossible had never happened.

Forget Lindsay, I was stunned myself.

Silently the top of the hill once more grew in size as it floated higher into the air, until eventually it was massive in size and the very cap of the hill separated from the earth and floated into the sky.

Lindsay was trapped between viewing it as a religious experience or a threat. Immobilized for the moment.

Then came the black suited man seated beneath what was obviously now a huge red and white stripped parasail, pulling on cords, playing the winds like an organist at a Bach recital.

Suddenly, with a ferocious bark, Lindsay took off up the hill after him, having decided this apparition was a crime against nature and simply should not be.

The glider was fifteen feet above the hill top now and Lindsay was more amusement than a threat. The pilot of the glider waved "hello" as he floated above me and arced out toward the vast chilled lake.

Lindsay tore along the beach after him, barking loudly, knowing she had him on the run. Then he tilted, caught an updraft and climbed high into the sky above us.

I'd never seen anyone paragliding here before and, of course, it was on a day when I hadn't brought my camera with me. The last we saw of the kite, it was high above the crest of the bluffs heading west toward Bluffers park, 10 kilometres distant.

Lindsay a tiny black dot racing along the beach after it.

Back home, later in the day, I discovered the following video of paragliders shot at Bluffers Park. Although it was obviously filmed in the warmer Fall weather, with the leaves just beginning to change, it could have been the same man. In the video, as the glider rises up above the bluffs, the camera swings to the left and you can see the bluffs stretching out toward the horizon. The section of the bluffs where Lindsay and I walk and where we saw our paraglider is at that most distant point.

The next day when Lindsay and I went for our morning run, although no paragliders were in sight, Lindsay raced straight up the hill, barking loud enough to scare the devil.

She had to investigate every inch of the ground up there to make sure she had frightened him off for good, before rejoining me for the rest of our walk.