Fair Maidens, Lords and Common Folk, please be advised you are about to embark on a flight of purest fantasy. Unlike other posts to this blog, it cannot be read as a stand alone, but musts require you enjoin it here, at its very beginning.

Be hushed now, the curtain lifts and our players take the stage. 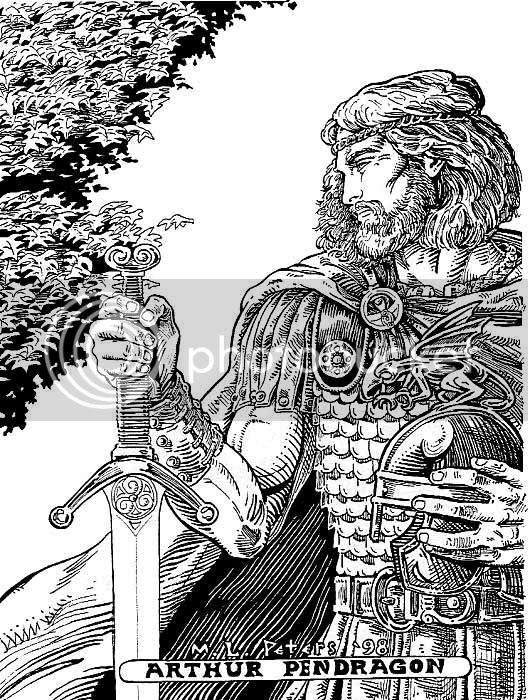 They were in the second week of a relentless rain. The floors of Camelot were caked with mud, the roof was leaking and the men were growing sullen and dispirited.

Of the six men lit by the flickering torches and flames from the fireplace, only Arthur seemed at peace, calmly oiling and polishing Excalibur to a radiant gleam.

The cold rain battered against the thatched roof of the wooden room and the great fire in the grate did little to lift the damp or the spirits. The men were wrapped in thick cloaks and depression.

"You know, Arthur, there are pages to do that work for you?" Gawain coughed harshly, both hands cupped around his goblet of heated mead.

Arthur smiled grimly, "Indeed, as you say, Sir Gawain. Yet it is a task I prefer to do."

"You've loved that old relic since wrenching it out of those rocks a life time ago." Gawain observed irritably. "God's breath, I would rather have my guts ripped out in heat of battle than suffer another day of this interminable rain and damp!"

There was a general grunting of assent from the others in the room.

As Arthur was about to speak, Galahad strode briskly toward them, pulling off his soaking cloak and rushing nearer the fire. "They've found Merlyn." he announced. "As you predicted, my Lord, out in yon forest gathering herbs that only grow under these miserable conditions."

Arthur smiled and gestured to Percival, "Go ye hither then and fetch our guest for Merlyn's inspection. Perhaps some entertainment will lift all our spirits."

Percival downed the last of his mead and flung the cup aside. Pulling his cloak more tightly around him, he marched from the room.

Gawain pounded his fist on the table, coughing again. "Aye, some entertainment!" he croaked weakly, "Anything to distract from this sodden curse that afflicts us!"

"Patience, Gawain!" counseled a weak voice from the doorway. A painfully thin man, wrapped in bearskin and clutching a large leather bag, moved cautiously into the room. Merlyn threw back his hood to reveal a mane of white hair and beard. "If you were looking for a quest, sir knight, you could have joined me in my search."

Gawain laughted harshly, "I'm no so daft, Merlyn. I want to escape the rain, not bathe in it!"

Beyond the room voices could be heard and the pounding of feet. Percival reappeared dragging a man in chains. He shoved the man into the room where he slipped on the mud and fell to the reeking floor.

Merlyn, looked at the stranger with amusement. "And what have we here?"

"My gift to you, Merlyn!" Said Arthur rising to his feet. "Knowing your love of oddities."

Merlyn walked around the stranger, sniffing and prodding with his staff. "He is dressed oddly to be sure and a little pudgy perhaps. A loss of twenty or thirty pounds would harm him none. How came he hence?"

"Aye," agreed Arthur. "A good question that. He says he's here to gather research for a post to what he calls a "blog". Claims he's from 1500 years in the future. And his name is Barry."