In the context of the novel the words have become a popular phrase that means, roughly, the equivalent of the sarcastic current phrase "Who knows?" Meaning there are some things that are just beyond us, that have no rational answer.

However, those characters in the novel who are strong enough and intelligent enough and determined enough eventually discover that John Galt actually exists and in finding out who he is, their lives are, not transformed, but unfettered.

Yet John Galt is more than the protagonist of Ayn Rand's novel. Rand learned about him during a visit to Southern Ontario. He is an actual man who lived a real life and accomplished amazing things. Even if some of those amazing things would not sit at all well with Rand's philosophy.

Born in Aryshire Scotland in 1779, Galt moved to Canada in 1826 as secretary to the Canada Land Company. He carried out extensive schemes of colonization, and opened up a road through the dense forest between Lakes Huron and Erie. In 1827 he founded the town of Guelph, and along the banks of the Grand River, the township of Galt, named after him by the Hon. William Dixon.

Despite all this work Galt was not a successful at business and returned to England in financial ruin. In 1829 he began to devoted himself to literary pursuits immediately achieving great success with his first novel "Lawrie Todd". Then came "Southennan", a tale of Scottish life in the times of Queen Mary.

Encouraged he went on to write other novels, biographies and an autobiography and to become one of the most popular novelist of his time. Although his works are seldom read today, his popularity came to rival that of Sir Walter Scott and Galt eventually retired to Greenock, where he continued writing until his death on April 11, 1839. His entire literary career packed into the last 10 years of his life.

Guelph. the little farming town he founded, is now a small but vibrant City in southern Ontario and is home to my youngest daughter and her family.

When we go shopping in the downtown core of the City, we pass by John Galt's statue which stands proudly outside City Hall in a pose that might be worthy of a Rand character. His hand is outstretched because he used the outline of his hand as the model for the downtown core of the city, roads radiating away from the palm like the fingers on his hand. 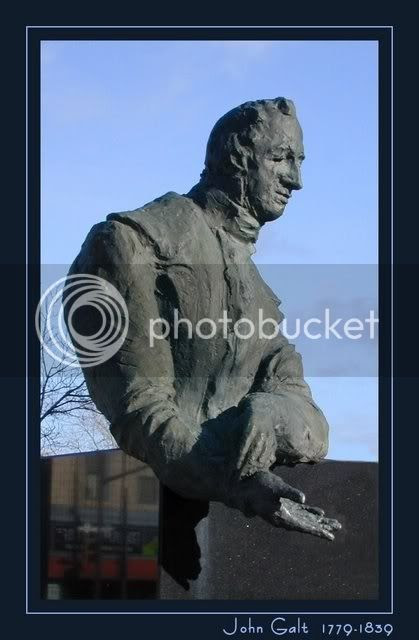 Tomorrow I'll explore how Rand came to Southern Ontario, discovered John Galt and came to use his name as the central character in her novel.