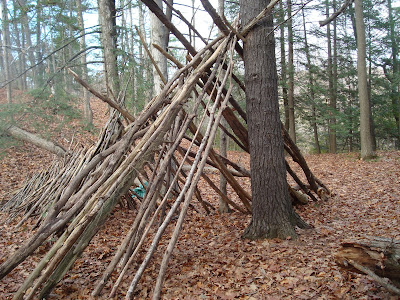 The Blair Witch weather of the previous month moved on to frighten other communities while the sun chased away the lingering dark where monsters might hide.

Suggesting there was no longer anything to fear in the long reaching shadows of the trees.

So I grabbed the camera and headed out into the deep forests that line the massive valley of the Rouge River, much to Lindsay's amazed delight.

I set up the camera and filmed us walking and running through the largest Urban Carolinian Park in the country. Lindsay pranced along through the deep carpet of fallen leaves, splashed through the cold waters of the eastern tributary of the Rouge River, and performed like a star. Or just a normal dog, whichever description seems to fit.

Then she stopped, her attention captured by a sound far above my range of hearing and suddenly took off up a nearby slope, vanishing deep into the enclosing forest.

I called her back but got no response.

But it was as if the forest had swallowed her whole.

Linda had been apprehensive about our going for a walk through the Rouge Valley after a television news report the previous night warned about a pack of wolf/coyote hybrids loose in the park. I was less concerned because the valley is vast, a good twenty kilometres in length. Besides, most animals rest during the afternoon.

And hunt in the dark.

Still, Lindsay and I had had one encounter with a coyote some months back and one was more than enough.

So I grabbed the camera and headed off into the woods after her.

The following video explores what we found.