A Tail Of Two Philosophies 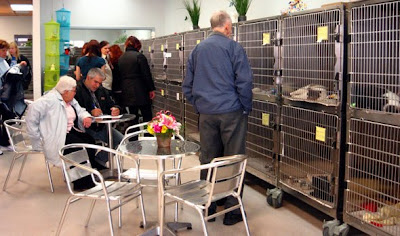 No, I spelled "Tail" correctly in the title. I'm being cute because this is a story about the Toronto Humane Society and the Ontario Society for the Prevention of Cruelty to Animals (Ontario SPCA). Who deal mainly with cats and dogs. Who have tails.

And this is my last opportunity to inject a little cuteness into this story.

The major news story in Toronto today concerns a police raid on the Toronto Humane Society and the arrest of all its senior staff members along with its entire board of directors on a charge of animal cruelty.

Police were acting on a tip supplied by the Ontario SPCA who have long been at odds with the philosophy of care that is the foundation of the Toronto Society's practice.

The Toronto Humane Society is an independent, non-profit animal adoption centre and hospital not funded by the government and relies solely on donations and volunteers. The organization prides itself as non-euthanasia and provides 24/7 care for the animals rescued.

The key here is the policy of "non-euthanasia". Except in extreme cases of animal distress, the Toronto Society believes in allowing sick animals to die a natural death. The Ontario SPCA finds this practice a form of animal cruelty enacted for fund raising purposes.

The police who conducted the raid on the Toronto Humane Society facility were shocked by the number of animals they found in extreme distress. Animals who obviously suffered from acts of cruelty and neglect. Four of the 1100 animals rescued from the Toronto facility have now been euthanized by the Ontario SPCA.

The Director of the Toronto Humane Society, as he was being arrested, told reporters, "Of course police found mistreated animals and extremely ill animals in our facility. We are an animal rescue facility and a hospital. If police were to search any human hospital in the city they would find examples of extremely ill and abused people. Would they arrest the doctors and staff and charge them with cruelty?"

The question is, at what point does a policy of non-euthansia of animals become a form of cruelty? Does it ever?

What do you think?

You can find more details about the story HERE