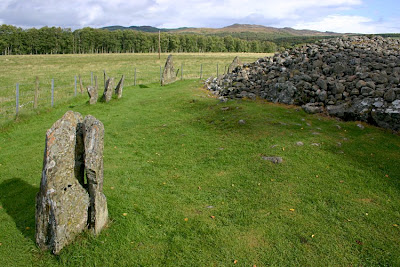 When this cairn was built and these massive standing stones were dragged into position, the birth of Jesus was still 2000 years in the future. Yet when Linda and I visited in 2002, as the culmination of 10 years of research into our Family History, we found them standing. Still.

This is the 4000 year old cairn at Corrimony, outside Beauly,in Northern Scotland. Surrounded by grazing sheep, this 4000 year old ruin calls us back beyond the bounds of history into realms of myth.

The cairns are thought to date from the late Neolithic period, and this type of cairn seems to be a style developed in this part of Scotland, which are collectively known as Clava Cairns.

Unlike the larger Neolithic tombs found in other parts of the country, it seems that the tombs at Clava were not used over a long period of time for a large community, rather evidence suggests that they were preserved for more elite members of a tribe. Perhaps a ruling caste or priesthood


The cairn is surrounded by 12 standing stones. Its original capstone lies off to one side, leaving the central portion of the chamber's roof now open to the elements.

It is still possible to crawl into the central chamber via a claustrophobic passage some 7 metres in length (as you'll see in the video I couldn't resist doing).

The mound was excavated in 1952 - when it was restored to its present condition - and traces of a burial in fetal position were discovered. The bones themselves had dissolved through the acidity of the soil working across millennia, with only a stain on the ground left to tell of their existence.

The passage and chamber are aligned on a Southwestern axis, aliened to the Midwinter sunset, as with the cairns at Clava. Midwinter was an important time of rebirth in the ancient calendar, as the sun began to regain its hold over the dark nights.

Bonnie has asked for bagpipe music in the background of these videos. I'm not able to do that but will post some amazing videos of Scottish Pipers and Dancers from our 2002 trip to Scotland on Sunday. Hence the "+ 1" revision in the title of this post. Hope you enjoy it Bonnie!