An Overdue Conversation With Lindsay 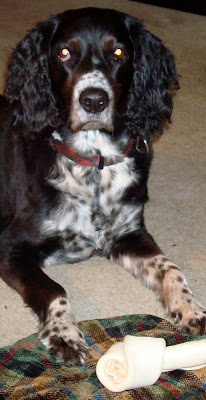 And so I settle down for a conversation with my dog, armed with some alarming new information.

Lindsay looks at me quizzically as I struggle to find my way into the discussion.

"Don't look at me that way, Lindsay. We have some things to discuss," I tell her.

"According to renowned canine expert Stanley Coren, professor emeritus at the University of British Columbia, dogs have a level of the intelligence about that of a 2-year-old toddler." I begin. " I'm not making this up. Coren presented his research, titled "How Dogs Think," at the American Psychological Association's August conference."

"His research included examining other works as well as extensive behavioral measures from his own studies." I went on. "Yes Lindsay. I know intelligence varies with the type of dog and the dog's breed, but Coren said that the average dog can learn about 165 words, including signals and gestures. Dogs in the top 20 percent of intelligence can learn about 250 words."

"Oh no, you can't fool me any longer, Lindsay. Do you know what breed was right up there with the best of them? English Springer Spaniels. That's you, in case you've forgotten."

Lindsay went back to staring at me.

"Other findings suggest that dogs have a basic understanding of arithmetic (counting up to four or five, noticing errors in simple computations) and solving spatial problems (such as the fastest way to a favorite chair). Or, as in your case, the fastest way to food."

Lindsay yawned again and then rolled over on her back. An obvious ploy, unworthy of her intelligence. I would not be taken in by this distraction tactic.

"Oh no you don't. You don't fool me Lindsay. You have a vocabulary of over 200 words. You know exactly what I'm saying. You're not going to get away with playing dumb any longer. From now on I'm expecting intelligent feedback from you."

She looked at me from her upside down position, her tail beginning to wag, her eyes sparkling.

"No I'm not going to rub your belly! We're having a conversation here. Do you understand?"

Lindsay wiggled and looked expectantly into my eyes.

And suddenly, to my horror, I discovered my hand was rubbing her belly. Her tail was wagging contentedly back and forth.

And she smiled, grateful that we were having this little conversation.