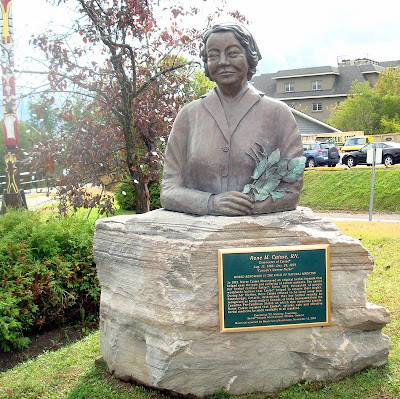 The Hamlet of Bracebridge 1920

The elderly woman raised a weak hand out to the nurse and began to cry. Thin tears ran down her craggy face and her lips moved shakily in an attempt to speak.

"Hush, hush," said the nurse wiping away the tears, "Don't distress your self. It will be alright."

The old woman's eyes look deeply into her own. "I'm not afraid to die," she said, her voice suddenly strengthened. "I've faced death before, you know. It was over twenty years ago, when my husband and I lived down south. I had...," she lowered her voice to a whisper as she named the dreaded word, "...cancer. In my breast. The doctors told me I would die if they didn't remove my breast. But I would be disfigured and I couldn't face that. So I told my husband to bring me back here, back home, to die."

The clinic was stiflingly hot and the nurse longed to open a window, but the mosquitoes outside in the dark were fierce. She and her dying patient would soon be eaten alive, so she left the shutters closed and tolerated the heat.

"We had an Indian working for us then, acting as a guide for my husband who was a prospector. We struck up a friendship and he was worried about me and the pain I was in. One day he came to me and said he was leaving soon and told me, quietly, in that shy way of theirs, that he knew a potion that would cure my disease."

The old woman lay quietly for a while, her eyes re-witnessing scenes from long ago. Then she turned her gaze back to the nurse and squeezed the woman's warm hand.

The nurse patted the woman's hand consolingly and wondered about the stories the elderly tell near the time of death.

"I've kept the secret of that recipe for over twenty years. Now I want to pass on the recipe on to you, for you to use to help others." The woman pointed toward the nearby table. "You see the paper and pencil on the table? Please bring it here and write down what I'm about to tell you."

To comfort the frail woman, Nurse Rene Caisse brought over the pencil and paper and sat back down beside her patient.

And the elderly woman, on her death bed in a weak and faltering voice, dictated the recipe for cancer's cure.

The Town Of Bracebridge 2009

"This is where that stuff was invented that everyone has been telling me I should be taking," I told Linda as we pulled off Highway 11 and started driving West into the little resort town. Outside, the cold rains and heavy winds that had accompanied us all the way North on our journey to Huntsville, began to let up.

"That Essiac stuff that you take in the morning?" Linda asked. "That's called after the nurse's name spelled backwards?"

"Nurse Caisse. I doubt we're going to find out much about her here, it was a very long time ago, but she was a big deal back in the '30's and 40's. She had all kinds of desperate people coming north to take the cure."

"Well, yes. But I can buy Essiac at my local drug store and they don't tell you it cures cancer anymore. What they claim is that it strengthens your immune system and there are many many anecdotal cases of people with cancer who have been cured. Or the spread of the disease has been slowed." We turned passed a small rocky outcrop and the main street of Bracebridge stretched out before us. "Its not completely snakeoil stuff. There are a lot of things that have been shown to strengthen the immune system. Still, I doubt in this modern age that Bracebridge wants to remember Nurse Caisse and her little bottles of Essiac."

I glanced over at her quickly, then pulled into a vacant spot on the side of Main St.

"There," Linda pointed back at the rocky outcrop we had passed at the start of the main street. "Look at that statue of that woman. She looks like a nurse. Well, how nurses used to dress."

We got out of the car and walked back to the out crop. On the top was the statue of a nurse holding a bouquet of flowers, her gaze looking protectively out across the town.

I climbed up to the statue and read the plaque on its base, "Nurse Rene Caisse" it said, and gave a short history of her career.

"I guess the good people of Bracebridge don't view Rene as a snakeoil salesman after all," I said.

"I guess they don't" said Linda taking my photo beside the statue. We later learned that not only had the town erected a statue in Nurse Caisse's honour, but the town theatre was named after her.

"Maybe there weren't all that many famous people who came from Bracebridge," Linda suggested.

Then again, maybe Rene Caisse was just a special person.

For those interested, you can learn more about Nurse Caisse (pronounced "Case") and Essiac by clicking HERE