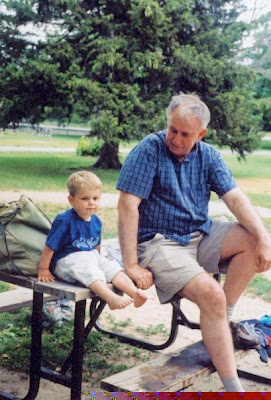 I am alone in the front of the car driving while Linda visits with our grandson in the backseat. We have just been to the AMC theatre to see "Cloudy With A Chance Of Meatballs" and they are laughing over scenes in the movie.

"My favourite part," Linda tells him. "Was when the giant pancake squashed the school, and all the children cheered! And then they poured pancake syrup on it."

"That was a really funny thing to say," Linda agreed.

"Grandma, can I as you a question?"

"Is it true that grandpa has..." and he whispered a word to her so low I couldn't hear.

But there was only one word it could have been.

And suddenly, for a moment, for a very brief moment, I couldn't breathe.

"Yes Tim," Linda replied. "He does. Did your mommy tell you?"

"I asked her when grandpa was too sick to play with me that time."

"Why couldn't they just take him into the hospital and keep him there until he's better."

"It doesn't work that way Tim. I wish they could."

"When we had the Terry Fox run to raise money for cancer at my school, I told them I was running for my grandpa."

"My other favourite part in the movie was the spaghetti tornado."

Linda got left behind for a minute by the sudden turn in the conversation of an 8 year old.

"Yes and my second favourite part was when the giant meatball blocked the front door of his father's house." Linda said, catching up.

While I drove on through bright sunshine on one of the nicest days we've had in weeks.

A smile on my face.

And a lump in my throat.