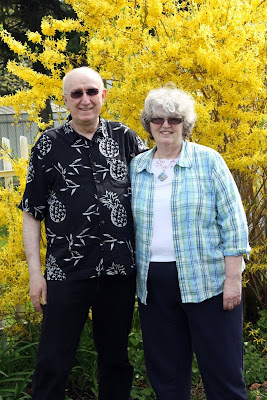 When they called my name I had a sudden sense of panic and didn't want to go. We were back in Toronto after an all too brief stay at the Bonnie View Inn in Haliburton, our final planned day at the Inn cut short by the scheduling of a Bone Scan for me at the Toronto General Hospital.

I'd had bone scans before and the actual procedure held no terror for me, but laying on my back on the hard bed that is inserted into the machine for half an hour, frightened me considerably.

The previous week's CT Scan, which only lasted 15 minutes, caused so much pain to my back it took two technicians to lift me into a seating position before I could exit the machine. And my back was in agony for days.

A couple of dips into the jacuzzi at the Inn had done wonders for my back, and I didn't want to return to my previous agony.

But I had to know what was causing my back pains, so I went like a good patient. I explain to them my experience with the CT Scan the previous week and they did their best to make me more comfortable and they assured me they had lots of help if I was unable to sit up on my own.

Then they strapped my arms to my side, taped my feet together and slid the table and I deep into the machine.

There is no noise with a bone scan and no sense of motion as the table slowly slides back out of the machine across half an hours time.

And in the end, predictably, my back was returned to agony and I needed the help of the technician to sit up and step down from the machine.

Linda was sitting anxiously in the waiting room as I returned and I think the look on my face was enough to tell her how I felt. We stopped at the hospital pharmacy to pick up some Advil because even the Tylenol with codeine I was on was not doing its job.

And then we went home where the last surprise of our 40th Anniversary weekend was waiting for us.

I had received a letter from Revenue Canada informing me that because the amount of my retirement pension was based on my previous year's income, when I had been receiving a full salary from my work, my Retirement Pension was being cut by $250 a month.

I laughed. I laughed until I hurt (which didn't take much). And eventually Linda started to laugh as well. It was just too absurd. An absurd ending to an absurd weekend.

Later, on my daughter Heather's blog, I found a very short little song that I don't think she posted with me in mind, but it was the perfect theme music for my anniversary. It healed my soul and gave me back the hope the weekend had almost stolen from me. Here it is---