Incident In The Waiting Room 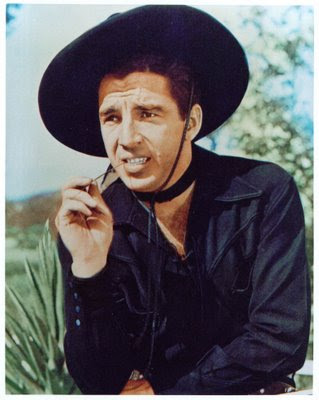 Stylishly dressed in black with a discreet gold earring and several gold chains, he reminded me of an old time cowboy star of my youth, Lash La Rue. Replace the cowboy hat with a stock of steely grey hair severely trimmed into a longish crew cut, replace one eye with a medical patch and the six gun with a cell phone and the image was complete.

It was Friday and Linda and I were the Radiation Clinic on floor 1B of the Princess Margaret Hospital. I'd finished my session with the Oncologist who had decided the cancerous hot spot in my right hip that was giving me so much trouble was treatable and had booked me straight into a preparatory CT Scan to have the spot be precisely tattooed on my flesh for the radiation treatment later in the week.

The waiting room is filled with soft plastic comfortable chairs set around a huge floor to ceiling fish tank through which tropical fish swam gently behind a veil of bubbles.

It wasn't crowded and he chose the seat opposite us, settling down with a slight clumsiness, unused to seeing the world through one eye, took out his cell phone and began dialing.

A family next to him were talking quietly but loud enough for us to be unable to overhear his first couple of calls. But then the driver for the cancer society came and they left.

"...Mrs. Flynn," he was saying, "I just wondered if Philip was in? No? Oh, he took that flight to Aruba did he? Then he won't be back until later this evening? Midnight? Oh that's unfortunate."

I was sipping a large Tim Horton's coffee and trying to concentrate on Peter Robertson's book "Piece Of My Heart", which was beginning to sound vaguely familiar. Could I have read it before?

"No, they didn't need to remove my eye, thank goodness. I'm saved for another day. And I do miss my little pooches, thank you for looking after them for me. No, I'm still here in Toronto and I have a slight problem...."

I took a peek over at Linda but she seemed absorbed in the Toronto Star's crossword puzzle.

"Well, you know whenever I'm here at the hospital, which seems to be every few weeks now, they give me a hard time about bringing credit cards and things like that with me. They won't let me keep anything in the room and it all has to go into an envelope and into a safe and if I need anything they have to dig it out again and It's a hassle for them. So I've taken to leaving all my stuff at home and just bringing $100 in cash with me...

"It pays for my Gray Coach ticket from London and a TV for the room and any little extra's, you know? But they held me over for a day and Gray Coach charge a fifteen dollar fee to transfer the ticket to a new date and I've run out of money. That little bit of money I brought with me? So I was just wondering if Philip was in and could run down to the station and pay it for me. But if he took the Aruba flight, I guess that's not possible...

"Yes London, Ontario's a long way from Toronto, that's true. In this age of plastic its embarrassing not to have your debt or credit card with you. I've been a flight attendant for so long, helping passengers with their troubles and now here I am? But don't you worry...."

"Mr. Fraser," the CT Technician had arrived at my chair. "We're ready for you now."

I got up, leaving my bag, coat and hat with Linda and made my way down the corridor to the scanner. Half an hour later I had been scanned, measured and tattooed. Returning to the waiting room, I noticed Linda was all alone.

"Poor man. He has leukemia. His mother died of it five years ago and so did his brother."

"I was wondering if it was a scam. Put a patch over one eye, tell a story over your cell just loud enough to be heard and wait for money?"

"Well, that's true, but only when we're downtown."

"And it wasn't that much money."

"You gave him your name and address for him to return the money?"

"I told him to pay it forward. Besides he showed me the bus ticket with yesterday's date and the small print showing the $15 transfer fee."

"Maybe you were. Besides I'd rather think good of people and I think he was a good man."

"Lash La Rue was always the good guy." I said, but Linda is younger than me and missed out on all those old cowboy movies and just looked at me strangely.

Maybe I'm just getting too cynical. I'm still not sure I would have given him the Twenty bucks.