End of the May 24 Weekend 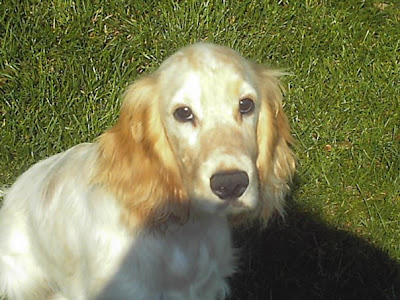 Sully comes prancing across my brother's backyard, all puppy soft and wiggly, and climbs up on my knee. Sitting on my stomach he looks intently into my eyes before sticking out his tongue and tentatively licking my nose.

"Oh Sully, leave poor Barry alone," My brother's wife Lynda admonishes him. But Sully doesn't listen and neither do I.

We are enjoying each other under the dappled shade of the old Norwegian Maple that straddles much of Keith and Lynda's yard and shades us from the heat of the late afternoon.

Named in honour of Captain Sullenberger, pilot of the fated flight 1549, Sully the cocker spaniel is all gentle love and warmth.

Linda and I are over visiting my brother and his wife for the afternoon as an end to Canada's May 24th long weekend. We're also there to congratulate their son Mark on his acceptance to Law School at the University of Ottawa.

"So how are you feeling," Lynda asks me. She is a Registered Nurse and Manager of the Providence Center's Outpatient Department, so her questions carry more of a professional edge than most. I go through my litany of complaints and annoying symptoms and she makes suggestions for handling things differently. I ask about getting an appointment with the foot clinic at Providence, my back problems making it difficult for me to bend over far enough to cut my toe nails properly and she agrees to try to set up an appointment for Thursday.

My brother arrives back from his Tim's run with coffees for everyone. We talk about the last episode of LOST; they tell me about a new show they've just started watching called Pawn Stars; Linda tells them about plans for her retirement party at her school to which they are invited; Mark arrives and we give him a house warming gift for his new apartment; Keith tells me about how he is using a new app on his iphone to manage his exercise program.

A light wind brushes against the canopy of the large tree moving around the dappled streams of sunlight like spotlights at a rock concert.

And I think how good it feels to just be out doing normal things on a normal spring day with normal people and a warm puppy.