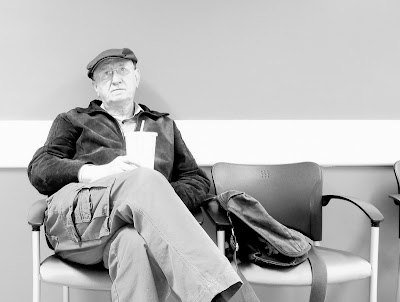 It wasn't as if I hadn't been warned. I've had nothing but dire warnings for the past two months. It wasn't as though I hadn't sought out help. It was a month ago I went to my family doctor and was put on Tylenol with codeine and referred to my oncologist who ordered a series of tests.

The day had started out well and Linda had left happily for work. I completed the last in my 40th Anniversary Fiasco series and Lindsay started to remind me that it was time for her morning walk.

That's when I first noticed an escalation in the pain in my lower back. It was agony getting to my feet. I discovered I couldn't put on my socks. Usually I just stand and put them on, a thoughtless act repeated thousands of times. But when that proved too painful, I tried sitting on the end of the bed but couldn't cope with that either.

I decided I'd better ice my back, but our freezer compartment is at the bottom of our Fridge and I couldn't bend down low enough to reach it.

So I apologized to Lindsay and let her out for a run in the backyard, there was no way we were going for a run that day.

Instead I sat down in my Laz-Z-Boy and phoned my oncologist's office and explained my situation to her nurse. Who promised to relay my message and get back to me.

An hour later she called back. The oncologist was tied up with patients but had had a look at the results of my recent CT Scan and it showed growth in the cancer in my right hip. Sufficient growth for me to be feeling severe pain.

"What are you taking for pain?"

I checked the bottle and told her.

"That's only Tylenol 2," she said. "Why would your doctor give a cancer patient with severe pain Tylenol 2?" I could visualize her shaking her head. "Listen, we're going to put you on Oxycocet for the pain. It will take away the pain but the price will be that it also will make you very fatigued and drowsy. To fight the drowsiness we're giving you Dexamethasone, which is a steroid. However, the price of taking the steroid is that it will make you constipated, so you'll need to drink plenty of water and take some over the counter stool softeners."

"Anything to get rid of this pain." I told her.

"So we'll fax these through to your local Drug Store but I want you to promise you will take them on exactly the schedule we've laid out and don't get into thinking you can tolerate the pain and delay a dose. Do you hear me?"

"Loud and clear. I promise."

"They will likely decide to give you an emergency radiation procedure on that hip when you're in for your scheduled visit on Tuesday, after they've reviewed the results on your Bone Scan, so come prepared for a longer stay."

After I returned home I took two pain killers and within 15 minutes the room had started to spin. Now I wasn't able to get out of my chair not only because of the pain but because the room wouldn't stand still. 15 minutes after that, I was asleep.

And that's how Linda found me.

It has been two days now and my body is adjusting to the medications. The Oxycocet still puts me to sleep but only for half an hour and then I'm relatively pain free and have enough energy until it's time for the next dose.

The family are getting together for Mother's Day at the Ontario Science Centre to see the Harry Potter Exhibit today and I'm determined to go with them. Although I have heard mutterings of "wheelchair" as Linda has talked with various family members on the phone.