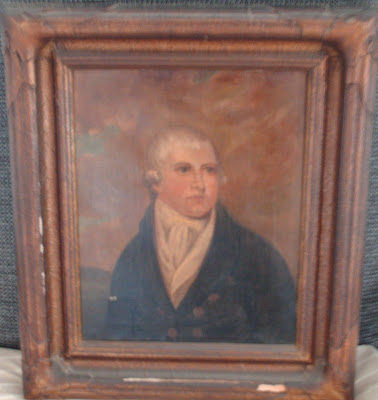 Although not a Sepia Image, it is the oldest portrait of a family member that we possess. His name is James Fraser (1785-1841), brother to my GGGrandfather Alexander.

Alexander inherited the family farm on the Duke of Gordon's Estate outside Portgordon in Scotland, while James went on to become a surgeon, married Elizabeth Hoyle, and moved to the United States. 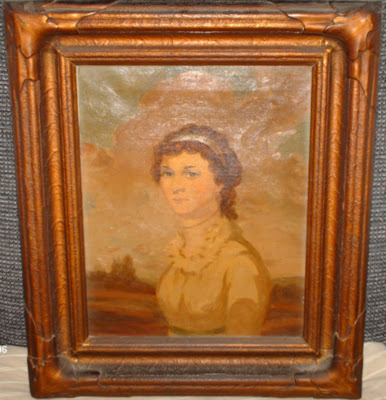 Surgeons were not medical doctors and were not well respected in those days, with community standings little higher than those of butchers. Indeed, the principal occupation of Surgeons in rural farming communities was the removal of fingers, toes and limbs due to dangers inherent in the rough agricultural life the people led.

Portraiture for the common people also had it's quirks. In those pre-photographic days, itinerant artists would spend the winters painting headless bodies of varying sizes, wealth and sex and then would travel the countryside stopping at various farms looking for those wishing to have a painting done.

An appropriate body type would be selected from the various canvases stored in the back of the artist's wagon and the subject's head would then be painted on the body.

We don't actually own either of these two portraits but the descendants of James (in Ohio) were kind enough to mail us copies, which we treasure.

Oncologists are doctors and have considerable standing in today's medical profession. I met yesterday with my radiation oncologist who confirmed the cancerous hot spot on my lower spine, responsible for my recent (almost crippling) back pain, is treatable. I was immediately sent for a pre-radiation CT Scan, measured and tattooed. Treatment will require 5 sessions of radiation beginning, likely next Wednesday.

The treatment will increase the inflammation for a while and also increase the pain so a residential nurse will be sent to the home to help out for a few days while Linda is a work.

Then, maybe I can get off these pills.