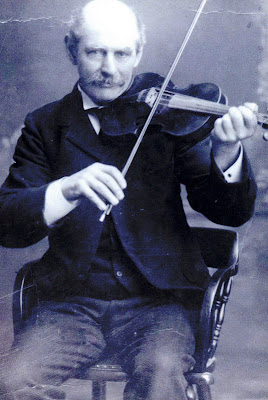 Alexander Simpson
Alexander Simpson was my great grandfather William's half brother. Father of 4, he accompanied his youngest daughter, Margaret, and her husband to Canada in 1912. 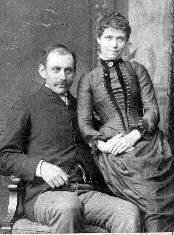 Alexander Simpson and Jane Forsythe on their Wedding Day
Margaret's husband, Robert Watson, was a Marine Engineer who had hoped to get work on a ship on the Great Lakes. However the ocean liner they sailed on from Scotland could not get through the thick winter's ice and they ended up staying in Newfoundland for a year before finally settling in Windsor, Ontario. Instead of a Marine Engineer, Robert became a Tool and Die Maker at Ford's Plant in Dearborn until he retired at age 67. Sadly he died 2 yrs later.

While Margaret and Robert were getting settled in their new country, Alexander Simpson, now 75 years of age, took a book out of the Library and read instructions for building a house, which he then proceeded to build for them on his own. The home remained in the family until 1979 and is still in terrific shape. 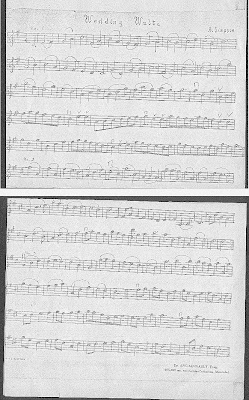 Alexander was a poet and a noted fiddle player throughout his long life and wrote waltzes for each of his children on their Wedding Day. The above is one of his compositions. Not being a musician myself I haven't been able to hear it. One of these days I'll have to buy some software that will allow me to plug in the notes and finally experience this being played.